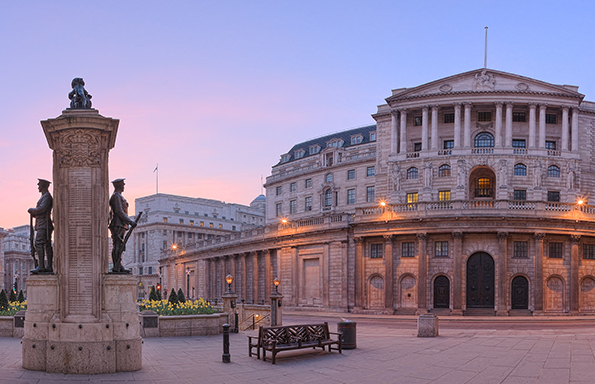 Greek philosopher and mathematician Pythagoras of Samos famously said that “Silence is better than unmeaning words”. This is something that the Bank of England’s Monetary Policy Committee (MPC) members have arguably neglected: they have repeatedly signalled a rise in their rock-bottom policy rate only to fail to delivery such a rise. Yet, it seems that things are about to change with markets currently anticipating an interest rate hike to 0.5% on Thursday, 2 November. But as Chris Giles of The Financial Times points out, “increasing rates just to prove there is value in listening to central bankers’ words would be the worst possible justification for a change in monetary policy”.

The decision to tighten monetary policy or not needs to be put in a context. Indeed, the Bank of England is targeting medium-term consumer price index inflation (CPI) for some two years from now. With CPI inflation currently surging at 3%, this seems a good time for the MPC to take action in order to bring inflation back to the 2% target. Mark Carney is currently predicting a further rise of inflation which will trigger an explanation letter to the Chancellor of the Exchequer. Therefore, raising the policy rate before having to write the explanatory letter (the letter is written when inflation exceeds 3% or falls below 1%) to the Chancellor seems a pre-emptive and reasonable strategy for the MPC to follow on Thursday.

Still, things are not that simple. The latest GDP reading of 1.5% annual growth for the third quarter of 2017 is slightly lower than the Bank’s forecast of 1.59% but, more importantly, it seriously questions the judgement of the Minutes of the latest MPC meeting (in September) that “the relatively limited news on activity points, if anything, to a slightly stronger picture than anticipated”.

In fact, the MPC has consistently been over-optimistic about the prospects of UK’s GDP growth. Indeed, from Figure 1, the MPC has overestimated, since 2006, 2-year ahead GDP growth by 1.43% on average; at the same time, the MPC’s GDP growth forecast has moved in the opposite direction to the actual outcome (their correlation is -0.07). 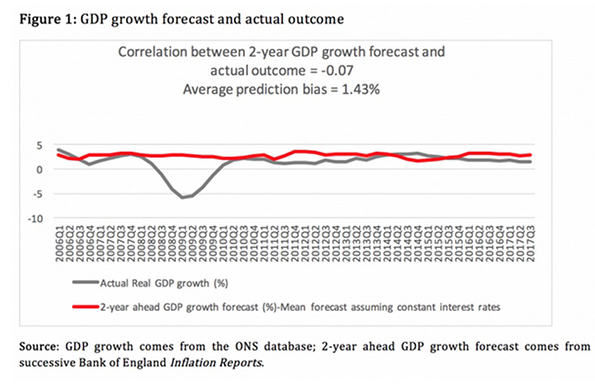 With MPC members consistently overestimating growth, this is far from an easy decision to make, especially in light of the ongoing uncertain Brexit negotiations. The economic picture is further complicated by the fact that CPI inflation is currently behaving in a very volatile manner. Indeed, 2-year rolling inflation volatility has currently reached its highest level for seven years. On the other hand, 2-year rolling GDP growth volatility is currently at its lowest level since 1989 (see Figure 2). 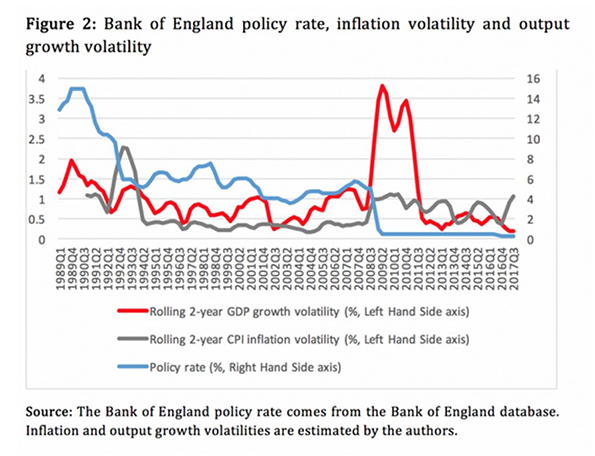 MPC members traditionally ignore medium-term inflation and output volatility. In fact, academic research has shown that policymakers pay more attention to output movements when inflation volatility is high and more attention to inflation movements when output volatility is high. This makes sense: they do not respond to higher volatility because they do not want to rush into a decision they might regret and possibly revert later on. With inflation so volatile – which means that prices can either go up or down and possibly in a wild manner – and output volatility so low – which means that we are really stuck with low GDP growth rates – the MPC members wisely chose during their last policy meeting to ‘wait and see’ at least until 2 November.

So, what are the possible implications for our economy if, as is widely expected, the MPC decides to pull the trigger on Thursday? Fresh academic research has found that in the presence of rising economic uncertainty, monetary policy tightening becomes less effective. The reason is that elevated uncertainty motivates agents to postpone decisions until more precise information becomes available, and this cautiousness makes them less responsive to changes in the economic environment, including the interest rate. The implication for the UK, where Brexit related economic uncertainty is indeed on the rise, is that an interest rate hike of 25 basis points on Thursday will have a much smaller impact on inflation and GDP growth than conventional wisdom suggests.

This poses a challenging dilemma for MPC members. Do they hike in order to remain credible, or do they continue to ‘wait and see’? If the MPC vote to hike, subsequent hikes will be necessary in order to meet the inflation target over the medium term. This comes at the expense of depressing GDP growth further. Our view is to abstain until the uncertainty cloud of Brexit negotiations starts to clear. The MPC members should take Pythagoras’ advice and only signal with intent.