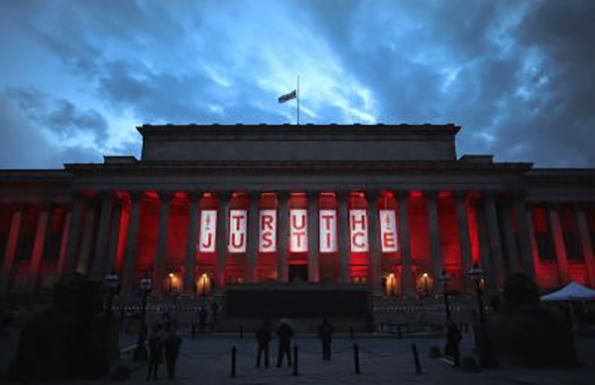 A report into the treatment of the 96 Hillsborough victims’ families by the former bishop of Liverpool James Jones supports the proposed “Hillsborough Law” – which would force public bodies and public officials to tell the truth.

Titled The Patronising Disposition of Unaccountable Power, the report looked at the families’ 27-year ordeal – between the 1989 disaster and the end of the inquests in April 2016. It puts further pressure on the government to make sure future victims and their loved ones don’t have to endure years of lies and misinformation.

The report by Jones, who chaired the independent panel – which uncovered evidence that led to new inquests – was requested by the prime minister Theresa May, when she was home secretary.

The Hillsborough Law is an initiative of the victims’ families. It would prevent the obstruction and reputation management by police and others that made the 27-year process so tragic. The Law would require public bodies to act with “candour” – simply put, to tell the truth. But “candour” means more than just not lying. It would require the police and other public bodies to cooperate fully with investigations. Under the Hillsborough Law, victims can apply to the High Court or an inquiry chair to force public bodies to set out their position and make it clear what they say they did right, and what they accept they did wrong.

There is already a common-law duty of candour in the UK, but its limitations were laid bare in the Hillsborough Inquests. For two years, the various police parties refused to accept any failings. They convinced the coroner that the jury should not be told about the 2012 apology by the then chief constable of the South Yorkshire Police, who stated that:

Disgraceful lies were told which blamed the Liverpool fans for the disaster.

These two admissions were central to the Hillsborough families’ cases. But they were ignored by the police and their lawyers during the inquests. Instead they again argued aggressively that the disaster was the fans’ fault. This ensured that the hearing took longer, cost more and inflicted more pain on the families who were forced to endure it.

Under the Hillsborough Law, failing to comply with the duty of candour by a public official or public body would be a crime. If an official misleads the public, the media, court or inquiry, he or she could be fined or go to prison for two years. So in the Hillsborough Inquests, the police would not have been able to pretend that the 2012 apology didn’t happen. It would have spared the families and the public purse tortuous weeks of cross examination.

From Hillsborough to Grenfell

Proposed with cross-party support, the Hillsborough Law had its first reading in parliament in March this year, but fell because of the general election. But the bishop’s report highlights the costs of inaction. The letter to Theresa May, and a big push on twitter to coincide with the release of the bishop’s report may resurrect the bill in this parliament – and there is no better time. The Grenfell Tower disaster is another tragedy that will require support for the victims and candour from public bodies.

The immediacy of the apparent failings at Grenfell was shocking. We saw the fire spread with terrifying speed on television and soon learned of the Tenancy Association’s warnings to the intractable management committee. We saw the anger in the streets at the Council’s relief and rehousing effort. Initial demands were made for a report by the end of summer, but the survivors and families were forced to settle for a longer public inquiry chaired by Sir Martin Moore-Bick – a retired judge.

The Hillsborough Law would empower the Grenfell victims and their families to demand that the public bodies involved cooperate fully and openly with the inquiry. These bodies would be forced to tell the truth, and be clear about any failures. If the Law is passed, the legacy of Hillsborough will help to create a new era of transparency and justice for victims and their families.

Jared Ficklin
Hillsborough – at last, the shameful truth is out