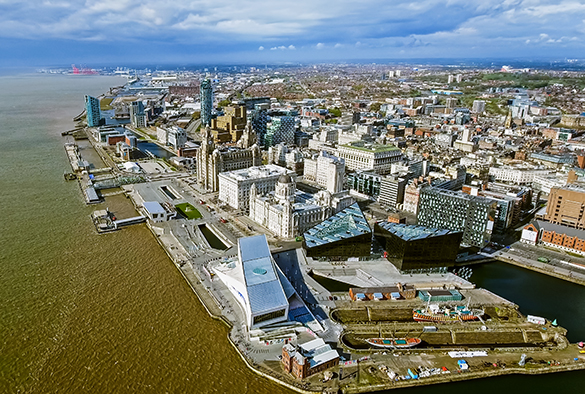 Liverpool should position itself as an international ‘social city region’, according to a major new report by the University of Liverpool’s Heseltine Institute for Public Policy and Practice.

The Institute’s Dr Alan Southern and Dr Matt Thompson, alongside social investor, Helen Heap of Seebohm Hill, analysed the scale, scope and value of the social economy to the region between October 2016 and June this year.

They found that, in Liverpool alone, there are 696 social organisations, employing 18,500 people, generating £1.5 billion of revenue and holding net assets worth £2.9 billion.

Across the whole city region, there are 1,400 social organisations, accounting for 2.2% of all registered companies.

Dr Southern said: “There is clearly huge potential for the Liverpool City Region social economy to generate jobs, and to offer solutions in helping resolve the region’s many challenges, if given the right support from government, the necessary governance capacity and the tools to help it grow.”

The report authors define the social economy as charities, social enterprises, cooperatives and self-help initiatives that produce and distribute goods and services. The category includes ‘anchor’ institutions such as universities and housing associations who hold a clear social purpose and are “able to spend their revenues, procure services and deliver contracts in ways that make the whole economy more social”.

Crucially, they are organisations independent of the public sector who hold a “social objective” as their primary purpose, rather than private profit.

To help support the development of a thriving social economy, the report urges policy makers to adopt what they call a “3G Approach”, which stands for Government, Governance and Growth.

Among the recommendations for Government is the appointment of a Lead for Social Economy and the development of a Social Value Framework within the Liverpool City Region Combined Authority, as well as the creation of a Land Bank Database “of all publicly-owned assets across the city region that community groups or social entrepreneurs can utilise in order to exercise their Community Rights to bid for or to challenge the sale of public assets (Localism Act 2011).”

To provide effective Governance, a number of networks should be established serving community anchor organisations and procurement practice, alongside a digital platform that allows peer-to-peer interaction between users and stakeholders. A ‘network of networks’ will deliver “an effective institutional infrastructure organisation”.

For Growth, the report recommends the establishment of a Social Economy Fund, to provide financial infrastructure; a Social Economy Database, to build up city region ‘solidarity markets’; and a Social Economy Framework, which could consider how to invest a proposed 1% of local authority procurement budgets into a public service innovation seed fund.

Policy makers are also urged to consider how to replicate the success of Baltic Creative CIC and Beautiful Ideas Co. as well as renting out publicly-owned buildings at pepper-corn rates to social organisations.

Report co-author, Helen Heap, who co-founded and is CEO of Seebohm Hill Ltd, a Liverpool-based social investment consultancy, said: “A healthy social economy is an essential ingredient in the delivery of any economic growth strategy. This research provides hard data and practical suggestions on how we can support more social organisations to deliver the economic and social value they are capable of.”

“The report provides a unique insight into the existing value of the social economy to our City Region and shows the clear potential to achieve even more when it comes to jobs, growth and social value.

“I look forward to working with all arms of the social economy to make this a reality in the years ahead.”

The Scale, Scope and Value of the Liverpool City Region Social Economy report is being launched at Rathbone Hall, in the Port of Liverpool Building, on Thursday November 9 between 10am and 12.30pm. Speakers include Liverpool City region Mayor, Steve Rotheram; Mark Basnett, Managing Director, LCR Local Enterprise Partnership and representatives from social businesses including Homebaked, as well as report authors.

More
Liverpool’s challenges show how far the city has come