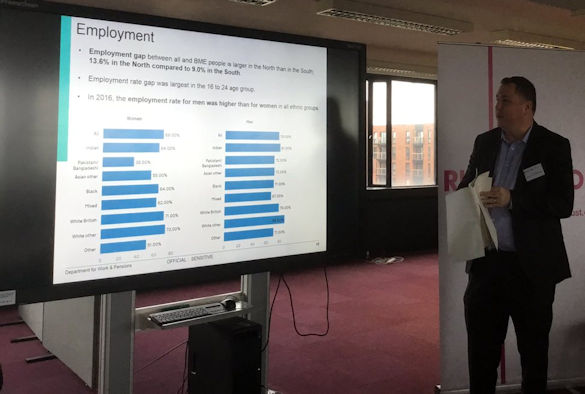 Senior representatives from central and local government, the Runnymede Trust, UNISON, local employers, and community leaders gathered together at the University of Liverpool on Friday 3rd November to discuss (BME) inequalities in employment.

The meeting was held following the recent launch of the government’s Race Disparity Audit, which was designed to assess differences between ethnic groups in treatment across a range of public services, and to develop strategies to reduce these disparities.

Four analysts from the Department for Work and Pensions attended the event, delivering a presentation on the work of the audit, including their geographical employment hotspot analysis, and what actions are to follow.

Additional speakers included Dr Gemma Catney of the University’s Department of Geography and Planning who presented her work on geographical inequalities in BME employment, and a representative from UNISON North West who discussed what role trade unions could have in reducing these inequalities.

The meeting was co-organised by Dr Gemma Catney and the Runnymede Trust, and chaired by Runnymede’s Director, Dr Omar Khan. Presentations were followed by roundtable discussion sessions, to pull together the experiences and expertise of delegates, to inform an action plan.

Dr Catney said: “we have quite detailed insights into ethnic inequalities in unemployment and career progression at the national level, but we know much less about the geography of these outcomes. This is despite the fact that where you live has a profound impact on your labour market prospects. My research (with Dr Albert Sabater, University of St Andrews) has identified concentrated pockets of unemployment for ethnic minority groups across many major urban areas of England and Wales.

“Birmingham features amongst the top five local authorities for unemployment for multiple ethnic groups (including Indian, Pakistani, Chinese and Black African). Liverpool and other parts of the North West also fare particularly badly, begging the question of what  interventions are needed to improve the persistent inequalities in our local labour markets.

“The event was designed to provide further insight into these geographical inequalities, but most importantly to discuss what strategies might be adopted to reduce – and ultimately eradicate – the disadvantages experienced by BME groups across the country”.