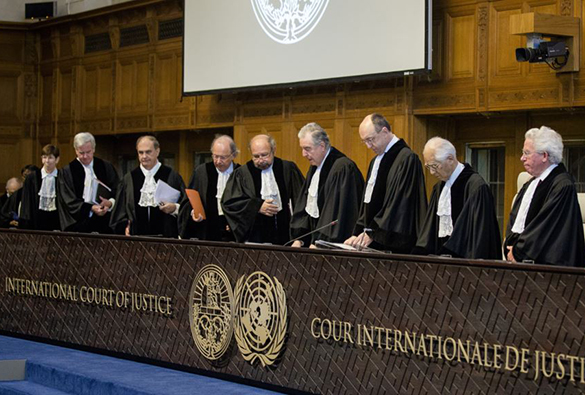 The UN has used its first opportunity since the Brexit referendum to send a powerful message. In a significant diplomatic setback, UK judge Christopher Greenwood has lost the seat he has held on the International Court of Justice since 2008. This is the first time the UK has not been represented on the court since its inception in 1946.

As the postmortem begins, there are undoubtedly a number of contributing factors in this decision. But the potential significance of Brexit should not be ignored.

The principal judicial organ of the UN holds elections every three years, with five vacancies each time around. This year, judges from France, Somalia and Brazil were reelected without incident. If bookmakers were offering a market on the election, the odds on the two remaining seats being filled by Greenwood and Dalveer Bhandari from India (who were both seeking reelection) would have been very short indeed. Instead, Nawaf Salam, Lebanon’s permanent representative to the UN, was surprisingly elected for the first time. That left Greenwood and Bhandari to contest the remaining seat.

In a series of subsequent votes, the General Assembly and the Security Council faced an unprecedented impasse. The former favoured Bhandari and the latter Greenwood.

As the plenary organ of the UN, within which all members are represented, the UK faced increasing pressure to respect the democratic credentials of the General Assembly. Just minutes before a third meeting was due to take place on November 13, it conceded the election.

Why the UK, why now?

The concession still came as a surprise to many, not least because permanent members of the Security Council (China, France, Russia, the US and the UK) have traditionally always been represented on the Court. While China decided not to nominate a candidate between 1967-85, no member of the P5 has ever lost a majority vote of the General Assembly.

Judges sit as independent experts and do not “represent” the interests of their national state once appointed. Greenwood’s controversial legal advice to the Attorney General on the legality of invading Iraq in 2003 may have been a factor. That said, Greenwood was initially elected in 2008, when the advice would be more likely to have an impact, and he has since been a respected member of the Court.

Instead, the election might be seen as a proxy battle in the ongoing debate on UN reform. The privileges enjoyed by the P5 are indeed archaic and unjustified. The current composition now means that Asia has gained a seat on the Court and the Western European and Other Group has lost one. It’s therefore also of symbolic value that the beneficiary of the UK’s demise on the Court is India. India has been at the centre of calls to reform the principal organs of the UN in line with geopolitical shifts and the emerging global economies.

But it’s impossible to ignore the fact that the ICJ election was the first opportunity for the international community to pass judgement on the UK since the Brexit referendum. On a day of losses, it was also announced on November 13 that the EU has decided to move the European Medicines Agency and the European Banking Authority to Amsterdam and Paris. Both Agencies are currently located in London. According to the European Commission: “The relocation of these two agencies is a direct consequence – and the first visible result – of the United Kingdom’s decision to leave the European Union.”

This should have come as no surprise. The agencies are inevitable causalities of triggering Article 50, as it would make no sense to locate them in a non-member state. And indeed, it may be overly simplistic, or even a post hoc fallacy, to read too much correlation. But while there may be no direct causal link, it would also be overly simplistic to deny outright the possibility that this result is a symptom of the UK’s waning influence in global affairs. And Brexit has undoubtedly contributed to that. As the UK unilaterally withdraws from multilateralism, in turn the UN, the archetypal multilateral institution, has edged away from the UK.

For if the result is simply the most recent snipe at P5 dominance, this fails to address the question of why the decision has come now, if it has not been taken at least to some degree in the context of Brexit? Nor does it explain why it has to be this particular member of the P5 that must take the hit. The UK has, after all, historically been the strongest supporter of the Court and is the only permanent member that has consistently respected the court’s compulsory jurisdiction.

It should come as no surprise that the election to the ICJ was decided by politics and not international law. It has always been this way. The only difference is that the UK and its allies in the Security Council have traditionally been the beneficiaries of such power politics. It is impossible to identify just one factor to explain this significant shift, but to deny the indirect relevance of the Brexit referendum would be very naive indeed. The principal political organ of the UN has spoken: the UK’s global standing has paid the price.