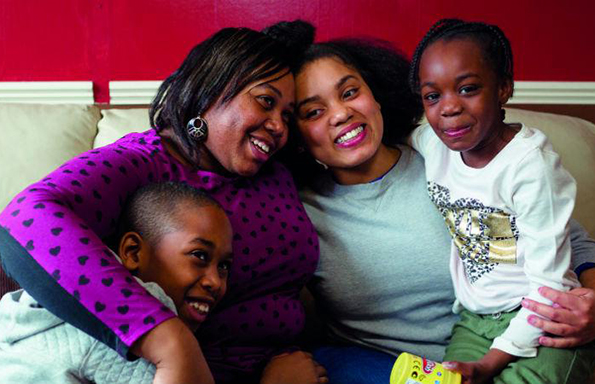 Recent changes to the benefits system have made the safety net for struggling families ever smaller. Larger families in particular are finding it harder to make ends meet, with the introduction of a two-child limit on child-related support, and the benefit cap. The change in policy means that there’s now a limit on the financial support a family can receive, regardless of the number of children they have.

At a recent conference in Bradford co-organised by The Children’s Society, Bradford District Anti-Poverty Co-ordination Group and The University of Liverpool, we heard from a local group of parents directly affected by the benefit cap: The Hope Rising Action Group.

One mother spoke through tears of the poverty she faced and how this impacted not just on her, but on her four children. Her son was sent to isolation at school for not being properly dressed in an expensive school uniform she simply could not afford.

She explained that another of her children had taken to putting plasters in his shoes as he did not want his mother to have to try and find money she did not have for a new pair.

Going to food banks was part of families’ routine, as was the endless, ever-present worry of how they would make their inadequate income last the week.

Our benefits system has historically been based on the principle of providing support on the basis of need. A family with children has more essential outgoings than a family without children, so needs a higher level of support to prevent them falling into poverty. Policies like the benefit cap and the two-child limit completely undermine this longstanding link between need and entitlement.

These policies have also been framed by a narrative that if you make the wrong choices, such as having too many children, or being unable to sustain paid work, then the state should no longer support you adequately, even when this leads to poverty or destitution. The Government argues that ‘people on benefits’ should have to ‘face the same choices’ as those supporting themselves solely through work.

This argument is underpinned by a stigmatisation of benefit claimants in general, and larger families in particular, who are demonised as an idle, undeserving ‘other’.

Whatever you think of the fairness of these policies, it is hard to question the scale of their impact:

Our conference gave real families a chance to be heard and demonstrated the true impact these policies have. The Children’s Society has been campaigning for the Government to honour its pledge to help struggling families by:

This article was originally posted by The Children’s Society