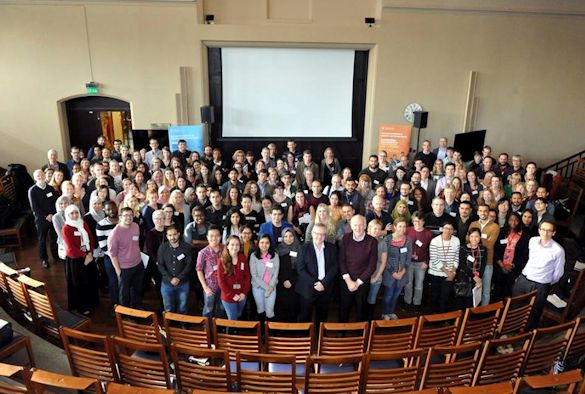 Staff and students attended the seventh annual Infection and Global Health Day at the Victoria Gallery and Museum. Hosted by the University’s Institute of Infection and Global Health, the day offered an insight into the Institute’s work over the past year with a programme of talks, including the Tony Hart Memorial Lecture, and posters delivering the latest of the Institute’s research.  Talks were given by postgraduate students and postdoctoral researchers working in the fields of clinical infection, microbiology and immunology, epidemiology and population health, and infection biology.

A Year in Review

The day celebrated the Institute’s achievements over the past year and launched the Institute’s latest annual report. The Institute, in line with its strategic plan (2016-2021), reported major developments over the past twelve months with highlights including major success in securing the Global Challenges Research Funding, the award of a MRC programme grant recognising excellence for research on pneumococcal disease, and the ongoing support for early career researches with Henry Dale and Intermediate Fellowships from the Wellcome Trust.

Other causes for celebration included the Institute’s continued progress in tackling the Zika epidemic, the launch of the Centre for Global Vaccine Research and the creation of a new Centre for Sustainable Food Systems.

Looking to the Future

The day also celebrated the contribution of Professor Tom Solomon to the Institute, who stepped down from his role as director in October 2017. Professor Solomon, after seven years of leading the institute, has stepped down in order to concentrate on his own brain infections research. Professor Nigel Cunliffe, previously head of the Clinical Infection, Microbiology and Immunology Department, succeeded Professor Solomon as Institute Head from October 2017.

Professor Cunliffe said about the event: “IGH Day was once again a fantastic opportunity to come together and share the breadth of research occurring at the institute, as well as recognise and reward some of the outstanding work happening.”

To conclude the event, the Institute held a presentation of awards celebrating those considered to have excelled over the past year among the student, academic and professional services bodies.