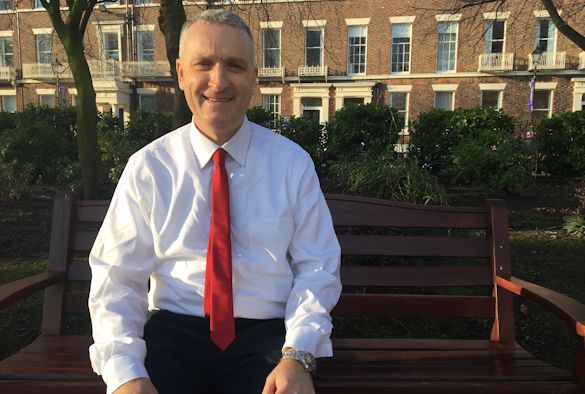 Professor Mark Boyle is passionate about the city of Liverpool, and having just taken over as Director of the University’s Heseltine Institute for Public Policy, Practice and Place, he thinks there is a huge amount the Institute can bring to the city.

Professor Boyle is a human geographer who has joined Liverpool from the National University of Ireland, Maynooth. His research spans cities and city-regions, focusing on their struggles to develop in the context of global economic restructuring and the social, political, cultural and environmental challenges they face.

Dr Aileen Jones has also recently joined the Institute as Deputy Director after 15 years of working in public policy, most recently heading up HSBC’s public policy team in the UK. Dr Jones has split her career between the public and private sectors, spending three years in Parliament as a Committee Specialist, leading research, briefings and inquiries on a wide range of public policy issues.

Much of Professor Boyle’s work has been focused on Glasgow and Dublin, which he says mirror Liverpool in lots of ways: “Like other cities which have been recipients of major investment, Liverpool is at the early stage of regeneration – there is much more work to do to take regeneration beyond the city centre.”

But he says there is something unique about Liverpool: “There has been some outstanding work undertaken by colleagues from the Heseltine Institute in parallel with the Sustainable and Resilient Cities (SaRc) network which shows that Liverpool is a wonderful laboratory for the urban scholar. Liverpool has its own character and spirit – it’s moved on from devastating industrialisation and in many ways has been forced to be pioneering.”

Professor Boyle said: “The Heseltine Institute has developed as a successful and well-regarded research institute in the city region and beyond because of the great work of our predecessors – in particular, Professor Michael Parkinson. Our job is to continue this work and further increase the scale of the Institute.”

Professor Boyle believes the Heseltine Institute can make a difference to the region in four significant areas: economic development, social justice, environmental sustainability and resilience, and effective leadership and governance.

“The development of public policies that address inclusive economic development and just wealth creation is absolutely key to our work, as is how we can work with the Local Enterprise Partnership (LEP) to develop the city region,” he says.

“The issue of social justice is also extremely important. Regional inequality is getting worse and there are big questions we need to look at in this area. Will the Metro Mayor have the power to change things? Will the new city deals be enough? Will Brexit make inequality worse?”

The development of public policy around environmental sustainability – such as reclamation of brownfield sites – is also firmly on the Institute’s agenda, as well as participatory urban government. Professor Boyle believes the two go hand-in-hand: “We need to allow the community more than a tokenistic voice.

“Any regeneration scheme without community buy-in just isn’t sustainable. We need communities who are empowered and policy-makers who can talk in disruptive ways at the interface of economic development, social justice and environmental sustainability.”

Professor Boyle says there are lots of opportunities for the Heseltine Institute to help address these challenges but stresses that while it needs a strong relationship with the city and region’s leadership, the Institute should also give a voice to those who are critical of certain traditions of public policy.

“We need to be rigorous, independent and politically neutral – the Institute needs to be a critical friend to the region with academic freedom at its heart.

He adds: “The Heseltine Institute has accomplished a great deal already and I’m very much looking forward to working with Dr Aileen Jones and other outstanding colleagues to see how our work can continue to make a real impact on public policy in the region.”