Suraya Hilmi Hazim is a final year PhD Student in the Department of Earth, Ocean and Ecological Sciences:

Volcanoes have attracted people from all walks of life for centuries. Volcanic eruptions while extremely destructive, also provides the materials for life to flourish. Volcanic soil is known to be rich in nutrients for agriculture. Volcanic rocks can be used as aggregates in construction.

The heat from the belly of volcanoes (geothermal energy) helps to power homes with electricity. Volcanic regions are also very picturesque, splashed across paintings, postcards and Instagram feeds. It is no surprise then that volcanic regions are also some of the world’s most highly populated regions. In 2015, it was estimated that over 800 million people worldwide lived within 100 km of an active volcano. The numbers have probably grown since then and will continue to grow over the years to come. Understanding the processes leading up to a volcanic eruption has never been more vital.

My PhD project focuses on the relationship between the deformation expressed on the surface and the dynamics of the underlying volcanic plumbing system. Understanding this relationship will provide greater insights on the depth of the magma and the intrusion geometry, with the potential to constrain when and where an eruption may happen.

For my experiments, I use gelatine as the analogue material to model the Earth’s crust and dyed water (red, of course!) as the magma analogue. Gelatine sets clear which allows for observations to be made in real time. Gelatine is also photoelastic which allows deformation within the gelatine to be observed with the aid of polarized light. Most importantly, gelatine is a viscoelastic material which means that it can express both viscous and elastic behaviour depending on the extent and timescale of deformation. This property makes gelatine a versatile analogue material to be used in different laboratory experiments. My experiments focus on deformation of gelatine within the elastic regime. 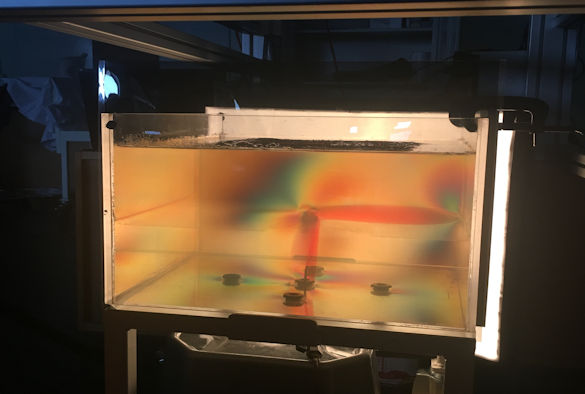 To simulate the formation of ground and subsurface deformation patterns induced by the propagation of magma-filled fractures in the Earth’s crust, dyed water is injected into the base of a clear-Perspex tank at a constant volumetric flux. The experiments are monitored using digital cameras to record changes in the intrusion geometry over time and progressive deformation on the surface of the crustal analogue is recorded using an overhead laser scanner. Polarized light allows subsurface stress patterns to be observed as the dyke grows.

Good experimental models however, should always be complemented by natural observations in the field. As part of my studies here at the University of Liverpool, I was very much encouraged to do fieldwork to complement my experimental models. I have been given the opportunity to travel all the way to Torres del Paine in Chile, one of the southernmost regions of South America which overlooks the Southern Patagonian Ice Fields, one of the biggest continental ice fields in the world.

The majestic landscape of Torres del Paine owes its origins to the region’s tectonic and glacial history. Dark layers of sediments originally deposited at the bottom of the sea now crown the peaks of the Cuernos del Paine (image below), the centrepiece of the national park, which presents evidence of uplift within the region. Sandwiched between the layers of sediment are light-coloured bands of rock which are a stark contrast to the darker sedimentary layers. These light-coloured bands of rock are made of the resilient granite, which have withstood the erosion and carving by glacial movement over time. 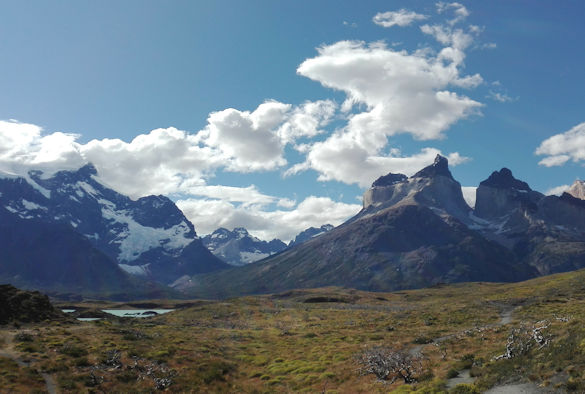 Torres del Paine is nature’s very own classroom to learn more about the emplacement of magma within the Earth’s crust and the relationship between magmatic intrusions with its surrounding host rock. The exposure of granite in the national park presents a very unique opportunity for magmatic intrusions to be studied as a three-dimensional body as the hiking path around the national park conveniently circles the main intrusive complex. Collecting visual data on the geometry of the intrusions as seen from different parts of the national park could collectively be used to infer the geometries and depths of emplacement in nature. I will be using image analysis to piece spatial information together from high definition photographs and annotated sketches made in the field.

Throughout my PhD, I have been lucky to be able to attend courses and conferences within the UK and abroad, which has positively shaped my overall experience as a PhD student. All this would not have been possible without the support of my research group here at the University of Liverpool and my funding bodies, the Malaysian Ministry of Education and The National University of Malaysia.