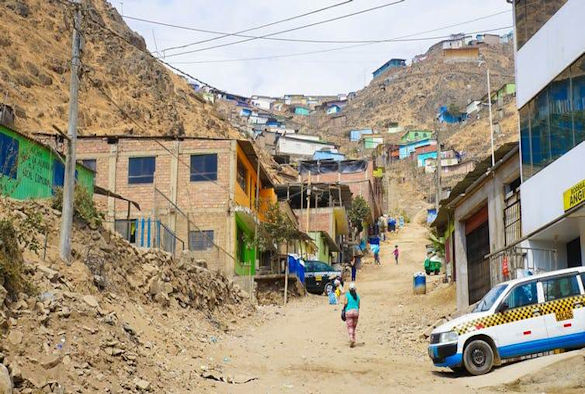 To mark World TB Day, Tom Wingfield, NIHR Academic Clinical Lecturer in Infection and LIV-TB Collaboration lead at the University’s Institute of Infection and Global Health, writes for The Conversation:

Rosario hacks into a handkerchief, coughing up the bloodstained phlegm that plagues her chest in the mornings. On hearing the noise, two heads pop up from under a blanket – Rosario’s twins, Gonzalo and Bruno. A wail starts up from the crib in the corner of the one-room shack. As she puts baby Angelita to her breast, Rosario ponders her situation.

It’s been half a year since her husband Samuel passed away, two months since this horrible cough started, and six days since the doctor told her she had tuberculosis and she started the medicines. Nearly every day since then, Rosario has had to make the hour-long, bumpy minibus journey to the tuberculosis clinic – Angelita in hand – so the nurse can witness her taking the drugs.

But Rosario just can’t get to the clinic today. Her neighbour can’t look after the twins, and Rosario has no money to pay for the minibus ride. More pressingly, there is no food left to cook nor kerosene to cook with.

Rosario quickly calculates that, after deducting two packets to feed the twins, she has enough biscuits left to sell for a small profit at the minibus stop. For today, at least, that will stop the family going hungry. But it will also mean not arriving at the clinic until after it shuts – too late to take her medicines

Rosario’s situation in a Peruvian shantytown is not fictional, not isolated, and not new. Nearly a century and a half ago, Rudolf Virchow, the father of social medicine, recognised that tuberculosis (TB) and poverty were inseparably linked in a vicious cycle. He called TB “a social disease”.

Indeed, the improvements in poverty levels, living conditions and nutrition that occurred during the Industrial Revolution in Europe were associated with a fall in TB rates, many years before the discovery of the TB bacteria or TB medicines. Today, the poorest households continue to suffer the highest levels of infectious diseases and, in trying to access healthcare, can be pushed deeper into poverty and ill health – the so-called “medical poverty trap”. There is no disease that better typifies this trap than TB.

Despite this, recent global TB control strategy has been disproportionately focused on medicines and tests rather than addressing the social causes of the TB epidemic. And so, today, Rosario’s terrible dilemma continues to be faced by many of the roughly 10m people worldwide who will develop tuberculosis this year (1.3m of whom will die).

This is one of the reasons why the global response to TB is not working. A more holistic approach to TB control is needed that addresses not just the disease but also the person who has the disease and the circumstances in which they live.

In its 2015 End TB Strategy, the World Health Organisation (WHO), for the first time in the modern era of TB control, called for social support and poverty alleviation strategies for people with TB to reduce the hidden costs of treatment, reduce stigma, empower patients, and increase TB prevention, the number cured and their overall well-being. But evidence that this type of strategy works was limited.

Testing the theory in Peru

The multi-disciplinary Innovation For Health and Development research team, which I joined in 2010, has been working for the past two decades in shantytowns near Lima, Peru, to generate new evidence to fill this knowledge gap and support TB-affected households.

One of our first tasks was to measure households’ hidden costs of TB treatment. Hidden costs (like those Rosario faces) included travel to clinics, food and lost income.

We found that when these hidden costs exceeded a fifth of a household’s annual income, the patient in the household was more likely to abandon treatment, fail treatment or die. In essence, the threshold of costs that we had measured had been catastrophic, not only to household finances but also to the TB patients’ health. This threshold, among others, was subsequently endorsed by WHO in their TB patient costs survey, which is being deployed around the world.

Our findings had identified a crucial factor explaining why medicines alone were not controlling TB. In response, we provided social and financial support for TB-affected households. Financial support consisted of bank transfers (up to US$40 per month) to reduce the hidden costs of TB and enable access to TB care. Social support included household visits by our research nurses and mentoring from mutual support groups led by former TB patients to empower households to access care and reduce stigma.

The intervention was a success. Supported TB patients were significantly more likely to complete their treatment or be cured, and their children were more likely to take medicine to prevent TB.

Rosario (not her real name) was one of the patients who received this support. Using the money she received throughout her treatment, she was able to keep going to the clinic and ensure that Gonzalo, Bruno and Angelita were fed regularly, and took medicine to prevent TB. She is now cured of TB and able to work.

Helping households affected by TB to avoid the medical poverty trap, and providing them with moral support and hope, can enhance TB care and prevention. Without it, we won’t achieve the End TB Strategy goal of eliminating the disease by 2050, and millions more vulnerable households, like Rosario’s, could continue to suffer an entirely avoidable downward spiral of poverty and ill health.