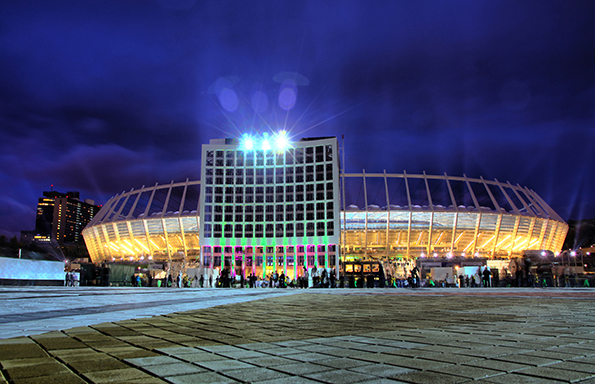 The Olympic stadium (NSC Olimpiyskyi) in Kyiv, Ukraine will host the Champions League final on Saturday

Liverpool FC and Real Madrid are heading for a 1-1 draw after 90 minutes in Saturday’s Champions League final, according to analysis by the University of Liverpool’s Professor Ian McHale.

Professor McHale, one of the UK’s leading sports analytics experts, crunched the numbers for both teams and their most likely line ups through his Sports Analytics Machine (SAM) super- computer.

While 1-1 may seem a tame scoreline considering the wealth of attacking options available to both sides, it is not necessarily the only possible outcome.

But Prof McHale said: “Unlike the FA Cup final, and many finals where there is a lot riding on the game, SAM thinks Liverpool v Real Madrid will see goals, and perhaps lot of them.

“Perhaps not, SAM thinks the probability of that scoreline is just 1%. Not impossible – but not very likely!”

Prof McHale says SAM makes Real Madrid the favourites to lift the title for the third consecutive season, at 57% probability. But a Liverpool FC victory after 90 minutes is not that far behind in the stats, with a likelihood of 43%.

Prof McHale worked on a Real Madrid line up of: Keylor Navas in goal, a defence featuring Sergio Ramos, Marcelo, Raphael Varane and Daniel Carvajal; Luka Modric, Toni Kroos, Isco and Casemiro making up the midfield; with Ronaldo and Karim Benzema in attack.

SAM is a super-computer built by Professor Ian McHale and Dr Tarak Kharrat at the University of Liverpool Management School. The machine takes into account multiple factors to come up with its predictions; including recent results, which team is at home, the strength of teams that both sides field, as well as the quality and form of the players on the pitch.

SAM predicts each week’s Premier League results for the BBC Sport website, among other outlets.

To listen to Professor McHale’s podcast on the rise of analytics in professional sport, please visit https://bit.ly/2BMNDTu

One thought on “Real Madrid most likely Champions League winners, according to football supercomputer”