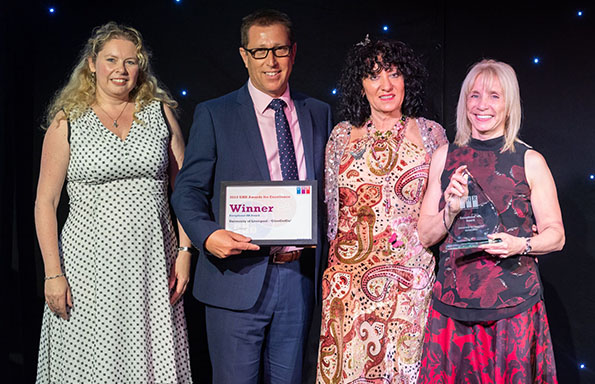 Human Resources has been recognised with an award for its work supporting unemployed people in Liverpool.

The award was presented at the gala dinner during the annual UHR conference in Bristol. The runner-up in this category was Canterbury Christ Church, for its delivery of Phase One of its integrated StaffSpace platform.

Speaking on behalf of UHR, Executive Director Helen Scott, said: “Judges were impressed by a project that really gets right to the heart of the community.

“The University of Liverpool’s participation in the GiveGetGo project is an example of the role an institution can play in its wider community, and is changing lives for those involved.”

The University partnered with local social enterprise Transform Lives Company (TLC) to offer volunteering and mentorship opportunities to long-term unemployed people. Since the launch of GiveGetGo in 2016, the project has supported 75 participants across the city, 39 of them at the University. As a result, 32 have found employment at organisation such as the NHS, Wirral Met College and the University itself.

The University provides volunteering roles for a half-day per week. Staff are trained as mentors, and participants are also provided with interview practice and other training. TLC offers two days a week of job search coaching, as well as access to health and personal development opportunities.

The partnership has since expanded to include organisations such as Everton Football Club, five housing associations, the National Trust and the Royal British Legion.

Carol Costello, Director of Human Resources, said: “I’m very proud of what we’ve achieved. Working together in partnership across the city region we’ve been able to offer opportunities to people who never thought they would work in a university.”

Liverpool was one of four shortlisted entries in the Exceptional HR category. Canterbury Christ Church University was named as a runner-up for the delivery of the first phase of its StaffSpace platform, which integrates HR, Staff & Organisational Development, Payroll and Finance data into a single digital platform. Other shortlisted instititions were Leeds Trinity University’s initiative focusing on well-being, and the University of Exeter’s integration of apprenticeships into its workforce.

More information on the winning and shortlisted entries is featured on the UHR website at: https://www.uhr.ac.uk/awards/awards-2018/2018-uhr-awards-shortlist-hr-excellence/.