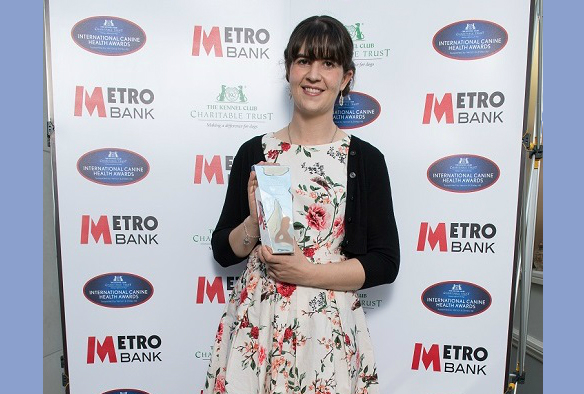 A veterinary student from the University of Liverpool has won the Undergraduate Student Inspiration Award at the International Canine Health Awards.

Jennifer Palfreyman, who is also a professional saxophone player, won the award for her dedicated work into the oriental eye worm Thalazia callipaeda, a parasitic infection of the eyes of humans, dogs and horses which will cause blindness if left untreated.

The parasite is spread by the fruit fly Phortica species and the first UK cases have recently been identified in dogs imported from Europe.

During summer 2017, Jennifer received funding from the Wellcome Trust to conduct a research project into the eye worm at the University’s Institute of Infection and Global Health. Jennifer examined the distribution of the fruit fly across six locations in the UK, to determine the risk of the parasite becoming established in the UK.

Third-year undergraduate Jennifer said: “It’s fantastic to be awarded this. I really enjoy parasitology, and when this project came up to study the fruit fly and eye worm, as a dog lover it made sense to pursue it.”

With the £5,000 award prize, Jennifer hopes to continue her research into the parasite, extending her work over a greater geographical area to assess further risks. Her grant has already supported her attending the British Society of Parasitology conference in Aberystwyth and allowed her to expand her work in creating information sheets and other educational materials to alert vets across Britain to the threat posed by the disease.

Launched at Crufts in 2012, the International Canine Health Awards were developed to recognise and reward innovative researchers, veterinary scientists and students who are significantly impacting the health and well-being of dogs. The awards are judged by a panel of influential representatives from the veterinary profession and the world of scientific research.