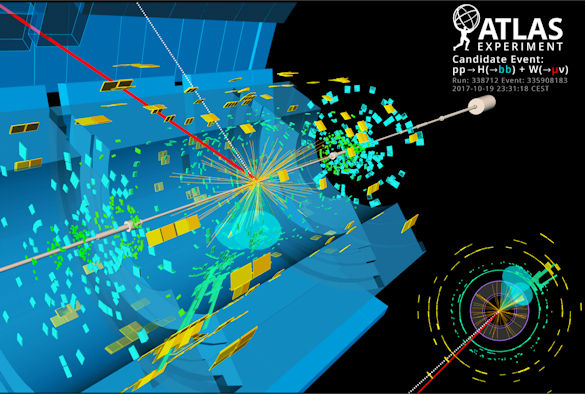 University particle physicists, as part of a UK research team, are celebrating as the ATLAS Collaboration experiment at CERN’s Large Hadron Collider (LHC) has – at long last – observed the Higgs boson decaying into a pair of bottom (b) quarks.

This elusive interaction is predicted to make up almost 60% of the Higgs boson decays. It has taken over seven years to accomplish this observation but could ultimately provide the first hints of new physics beyond our current theories.

Professor Karl Jakobs, ATLAS Spokesperson, said: “ATLAS is proud to announce the observation of this important and challenging Higgs boson decay. While the result is certainly a confirmation of the Standard Model, it is equally a triumph for our analysis teams.

“During the early preparations of the LHC, there were doubts on whether this observation could be achieved. Our success is thanks to the excellent performance of the LHC and the ATLAS detector, and the application of highly sophisticated analysis techniques to our large dataset.”

For Dr Andy Mehta from the University’s Department of Physics, this announcement is the culmination of over 7 years work.  He said: “We started to think about this ATLAS search even before the LHC started and it’s wonderful to finally to see this decay.”

This is one of the most demanding analyses carried out at the LHC. Since the LHC collisions produce b-quark pairs in great abundance it is essential to select events where the Higgs boson appears alongside a W or Z particle, which makes the events easier to tag.

Physicists from Liverpool pioneered this analysis and have played critical roles in the analysis of the data over the past seven years. This includes work on the key detector elements, reconstruction algorithms, data collection and cutting-edge analysis techniques all of which culminated in this historic achievement that marks a crucial step forward in our understanding of the Higgs boson.

Other UK groups who are part of the ATLAS collaboration include the Universities of Birmingham, Glasgow, Queen Mary, Oxford and UCL and have all played critical roles in the analysis of the data over the past seven years.

This includes work on the key detector elements, reconstruction algorithms, data collection and cutting-edge analysis techniques, with UK researchers also leading the group for two key periods, all of which culminated in this historic achievement that marks a crucial step forward in our understanding of the Higgs boson. Just six years after the Higgs boson was first detected.

Today’s announcement is a new confirmation of the so-called “Yukawa couplings”. Similar to the Higgs mechanism, these couplings to the Higgs field provide mass to charged fermions (quarks and leptons), which are the building blocks of matter. Combined analyses of the Run-1 and Run-2 datasets have resulted in the first measurements of these couplings, as seen in the recent ATLAS observation of Higgs boson production in association with a top-quark pair and the observation of the Higgs boson decaying into pairs of tau leptons.

Professor Jakobs concluded: “We now have the opportunity to study the Higgs boson in unprecedented detail and will be able to further challenge the Standard Model.”

Professor Daniela Bortoletto from the University of Oxford added: “I believe that this measurement will improve our understanding of the mechanism of mass generation and its possible connections with cosmology and astrophysics.”

The ATLAS Collaboration first reported this observation on 9 July at the 2018 International Conference on High-Energy Physics in Seoul. Today, in a seminar together with the CMS Collaboration, ATLAS presented results which have been submitted for publication to Physics Letters B. They are based on all the LHC data taken so far, and utilise machine learning technology and new analysis techniques to reach a significance of 5.4 standard deviations.1

Image: A candidate event display for the production of a Higgs boson decaying to two b-quarks (blue cones), in association with a W boson decaying to a muon (red) and a neutrino. The neutrino leaves the detector unseen, and is reconstructed through the missing transverse energy (dashed line). (Image: ATLAS Collaboration/CERN).

Further images and the full CERN release can be seen at https://home.cern/about/updates/2018/08/long-sought-decay-higgs-boson-observed