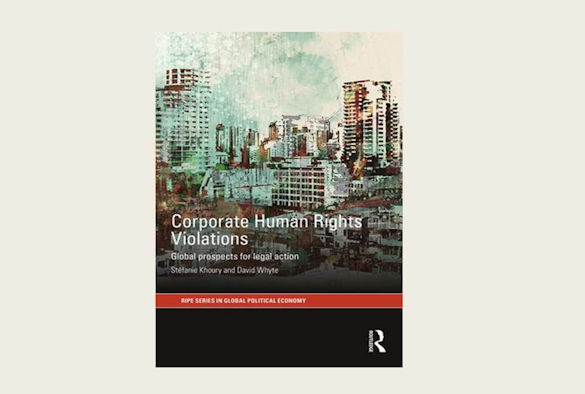 Dr Stéfanie Khoury and Professor David Whyte are with the University’s Department of Sociology, Social Policy and Criminology:

Next month, the UN Human Rights Council (HRC) will consider the first draft (“Draft Zero”) of a new treaty on the human rights responsibilities of corporations.

The treaty on the human rights responsibilities of corporations, rather clumsily titled ‘Legally binding instrument to regulate, in international human rights law, the activities of transnational corporations and other business enterprises’ is the result of four years of debate, negotiation and bargaining.

While the tabling of the draft is a move that will be welcomed by NGOs and activists who are involved in protecting people and the environment against the abuse of corporate power, it has already been criticised for key shortcomings and omissions.

First, it has been criticised for not going far enough in prohibiting “reservations” that could allow signatory states to opt-out of certain provisions and thus weaken the overall effectiveness of the treaty.  In article 15 of the treaty, it is asserted that “[r]eservations incompatible with the object and purpose of the present Convention shall not be permitted.”  Article 15 presents a strange paradox: any reservations proposed by states will inevitably seek to weaken the treaty, and thus be incompatible. This is, after all, the sole purpose of reservations.

This is, of course, not a problem confined to this Draft Zero but is a general problem in international law relating to UN treaties. As human rights researcher, Louis Yanes points out, state reservations have undermined the core provisions of the Convention on the Elimination of All Forms of Discrimination against Women (CEDAW).  A better approach would have been for Draft Zero to assert that no reservations would be admissible, a step that is possible under article 19(a) of the Vienna Convention on the Law of Treaties.

Second, Draft Zero places the onus exclusively on states to take the necessary action to make corporations accountable and to provide access to legal remedy for victims. But, as human right lawyer Carlos Lopez argues, Draft Zero pays little attention to the contradictions that arise in the context of public-private joint ventures. In a similar vein, how do we demand accountability in cases of collusion between state-supported paramilitary outfits and transnational corporations? How can we seek accountability in cases where corporate human rights violations occur and have been encouraged when state military forces are securing land and/or access natural resources.

Third, Draft Zero does not include a mechanism or system for monitoring and enforcing the treaty, meaning that the monitoring of the implementation of the treaty and respect of human rights falls within the ambit of the state. However, as the research on this subject repeatedly notes, states are often unwilling or unable to respond to corporate violations of human rights in any meaningful sense.

Elsewhere, we have provided empirical data that substantiates the argument that any treaty that sets out to address corporate violations of human rights will need a credible threat of meaningful enforcement to be effective. Evidence of the failure of the OECD’s NCP system shows that when enforcement mechanisms are lacking, corporations remain empowered to either ignore or deliberately undermine human rights standards set out in OECD Guidelines.

Indeed, the origins of Draft Zero lie in the obvious inadequacy of a system based on corporate voluntarism and the lack of effective regulatory mechanisms in John Ruggie’s Protect, Respect and Remedy framework and the Guiding Principles that he presented to the UN Human Rights Council in 2008 and 2011, respectively.  It was the widespread recognition of those inadequacies that led to the call by Ecuador and South Africa for a legally binding mechanism in 2014, a call supported by over 80 countries and 600 civil society groups.  It was this demand that led directly to the process that produced Draft Zero.

And this leads us directly to a fourth criticism.  Draft Zero does not take into account one of the major contradictions of human rights law: that corporations actively subvert human rights law to their own ends.

Corporations regularly use human rights courts to pursue decisions that ultimately enhance the profitability of business rather than human dignity, freedom or equality.  Article 13(7) of the treaty notes “that all existing and future trade and investment agreements shall be interpreted in a way that is least restrictive on their ability to respect and ensure their obligations … notwithstanding other conflicting rules of conflict resolution arising from customary international law or from existing trade and investment agreements” (emphasis added).

This seems completely contradictory and reflects what we have already noted, that “the long-running debate in the UN system has always been as much about upholding the rights of corporations as it has been about upholding human rights”.

The HRC has faced significant challenges this summer including the withdrawal of the US in June. How this will impact the negotiation of Draft Zero remains to be seen.

The US has historically opposed any legally binding mechanisms that address corporate accountability, and has continuously thrown its weight behind voluntary approaches and multi-stakeholder consultation processes.

What it comes down to is that the wording of Draft Zero, its shortcomings and omission indicate that the HRC is still not willing to flex its muscles and put human rights above the rights of corporations. What is becoming clear is that with or without the US weighing in, the core privileges, protections and special rights granted to TNCs and other businesses remain essentially intact.

Corporate Human Rights Violations by Stéfanie Khoury and David Whyte is published in paperback by Routledge.