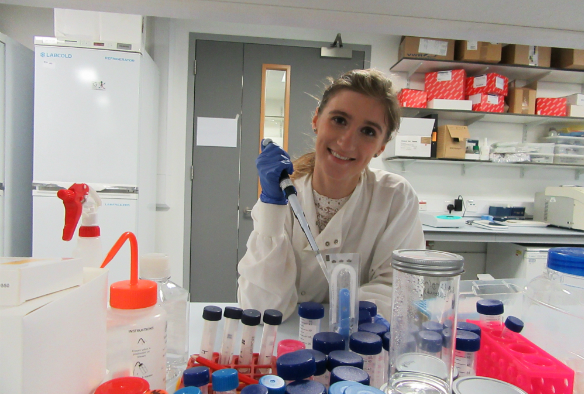 Eleanor Senior is a 3rd Year PhD student at the Institute of Infection and Global Health. Here she shares her research investigating vaccine candidates for a sexually transmitted infection (STI) that affects cows.

Many types of animal parasite are very well known, for example, most people have heard of things like fleas, tapeworms and ticks. However, there are many thousands of parasites that exist that you may never have heard of, but are no less important. Once such parasite is Tritrichomonas foetus.

This is a microscopic parasite that is sexually transmitted between cows and bulls causing a disease called Bovine Trichomoniasis, which is related to the human STI Trichomoniasis, caused by Trichomonas vaginalis.

T. foetus is found in many countries around the world including the USA, Brazil, France, Germany and Australia. Fortunately, this parasite does not infect cattle in the UK because of this country’s strict border controls and the use of artificial insemination (AI); a procedure that allows for screening of sperm for infections prior to insemination.

So what is so bad about Bovine Trichomoniasis anyway? This parasite often doesn’t cause any symptoms in bulls in the same way that many STIs are symptomless in men. Consequently, it is difficult to detect in bulls unless there is constant sperm testing. Likewise, it is also difficult to spot in the cows.  Often it causes early stage spontaneous miscarriage which can be so early that the farmer isn’t aware that the cow is pregnant in the first place. It can also cause short or long-term infertility. The first indication for the farmer that the herd is infected is that there is a decrease in the number of cows becoming pregnant or carrying to full term. Again, the best way to find out whether the parasite is present in the stock is to test all the cows. This can be pretty tricky and time-consuming, particularly when there could be thousands of cows on a farm or ranch which will need to be tested at regular intervals.

The lowered calving rates and lower levels of milk production as a consequence of this parasite infection has significant economic consequences for the farmer.  Furthermore, the need for the infected cattle to be destroyed as a means for protecting the rest of the herd takes an additional financial toll.  It has been estimated that in Texas alone the losses due to this parasite can reach $195 million. Taking into account the losses from other states in America the amount is considerably higher. So this parasite is clearly a problem both financially for the farmers and as a welfare issue for the cattle.

Although there are currently vaccines available to combat Tritrichomonas foetus, there are none as yet that prevent reinfection. Consequently, available vaccines must be given at each breeding season. This again isn’t very practical when there can be thousands of cows to immunise every month or two.

My PhD is aiming to find proteins from the parasite itself that can be used as vaccine candidates. We are searching for a small group of proteins that we can further test for key vaccine qualities such as:

– promoting an immune response
– being found in all variants of the parasite across the globe not just in one region. This is so that one vaccine can be used against all variants rather than multiple vaccines each of which deals only with one or two specific variants

To do this I am using a reverse vaccinology approach. So what is this? Classical vaccinology is what has been used to make lots of the common vaccines available today such as the flu vaccine. In these vaccines, weakened or killed viruses or bacteria are used to promote an immune response. However, the exact protein or proteins that causes this response are often not known. Reverse vaccinology involves using computers to predict proteins that are likely to give an immune response which is then narrowed down using a variety of laboratory techniques to give a small number of candidates. Some, or all, of these candidates are then used as the starting point to produce the actual vaccine.

By the end of my PhD, I hope to have come up with a list of potential proteins that can then be used to start designing a vaccine in the fight against this costly and distressing parasite.