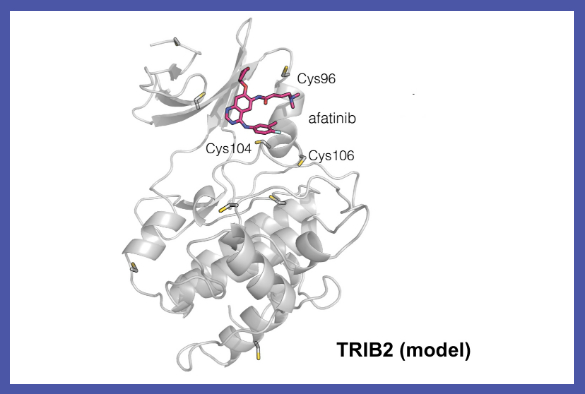 A new study by scientists at the University of Liverpool highlights how a clinically-approved lung cancer drug could potentially be ‘repurposed’ to design new treatments for future cancer therapies.

The research, published in Science Signaling, focuses on a protein called TRIB2, which is linked to promoting survival and drug resistance in solid tumours and blood cancers and is therefore of particular interest as a therapeutic target.

The study was led by Professor Pat Eyers and colleagues in the Department of Biochemistry at the University’s Institute of Integrative Biology, where BBSRC Doctoral Training Programme student Dan Foulkes worked in collaboration with scientists at the Universities of Georgia and North Carolina, Chapel Hill, in the USA.

The trouble with tribbles

TRIB2 is part of the Tribbles (TRIB) family of pseudokinase proteins – sometimes described as ‘zombie’ enzymes, due to their inability to catalyse chemical reactions. Tribbles were named after the small, round, fictional organisms from Star Trek, whose major role in life is to eat and reproduce. Consistently, Tribble proteins play many diverse roles in cell signalling, development and cancer.

In particular, TRIB2 proteins have the ability to promote cell survival, a hallmark of cancer cells, and TRIB2 is a potential new drug target for acute myeloid leukaemia (AML) and acute lymphoblastic leukaemia (ALL), which are both in urgent need of targeted therapeutics.

This family of drugs, called protein kinase inhibitors, were originally designed to block a different protein called Epidermal Growth Factor Receptor (EGFR) from working in lung cancer cells, where it can help stop or slow tumour growth in some patient populations.

The approved lung cancer drug afatinib is one of a number of EGFR inhibitor compounds identified by the study as a potential drug lead for the development of TRIB2-targeted cancer therapies.

Professor Eyers commented: “A long-standing goal in cancer research is drug-induced degradation of oncogenic proteins. Our study highlights how information obtained with ‘off-target’ effects of known drugs is potentially useful because it might be exploited in the future to help eliminate a protein that is involved in a completely different type of cancer.”

The research is one of two studies featured in the latest issue of Science Signaling that explores the structures and protein interactions of TRIB pseudokinases, a focus of work in Professor Eyers’ laboratory.