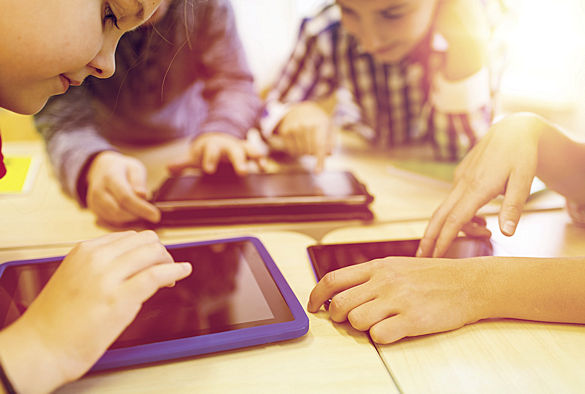 Young children who spent more than half an hour a day online were almost twice as likely to pester their parents for junk food, according to a new report published today (Wednesday, 17 October).

The study, which examines the associations between diet and advertising of junk food on TV and the internet, questioned children and their parents in the North West and across the UK.

Teams from the University of Liverpool and Cancer Research UK’s Cancer Policy Research Centre asked almost 2,500 seven to 11-year-olds and their parents around the UK about their eating habits and how much screen time they had, outside of doing homework.

79% more likely to be overweight

The results show that primary school children who spent more than three hours on the web were more than four times more likely to spend their pocket money on chocolate, crisps, sugary drinks and takeaways than their peers who browsed for less than half an hour.

In the North West, 36% of primary school children (aged 10 – 11 years old) are overweight or obese. Children who are obese are five times more likely to remain obese into adulthood.

Obesity is the biggest preventable cause of cancer in the UK after smoking. Cancer Research UK is calling for Government action on junk food advertising to children, on TV (live and on-demand) and the internet, as well as price promotions on ‘unhealthy foods’ in supermarkets.

Dr Emma Boyland, a lead researcher from the University of Liverpool, said: “Young children who spend more time on the Internet and watching commercial TV are more likely to pester for, buy and eat unhealthy food and drinks.

“Parents are all too familiar with being nagged for sweets and fizzy drinks in the supermarket or corner shop. Our research shows that this behaviour can be linked to the amount of time children spend in front of a screen and as a result, the increased number of enticing adverts they see for these sorts of products.”

The study found that, on average, children were online for 16 hours a week – not including time spent for homework – and watched 22 hours of television per week.

The amount of exercise done by the children had no impact on the results, showing that for this research, excess weight wasn’t linked with being sedentary.

Each additional hour of commercial TV that children watched was linked with an increased likelihood of pestering their parents to buy products they’d seen advertised.

Dr Jyotsna Vohra, from Cancer Research UK head of cancer policy research, said: “Obesity is the biggest preventable cause of cancer in the UK after smoking so it’s vital we see a 9pm watershed on junk food adverts on TV and similar protection for children viewing adverts on-demand and online.

“The evidence suggests that time spent online, where advertising can be prolific, and watching commercial TV increases the likelihood that children will pester for, buy and eat more unhealthy foods. If they didn’t then the food industry wouldn’t spend so much on advertising.”

In the North West, Cancer Research UK is running an awareness campaign to highlight the link between obesity and cancer. As well as radio advertising, huge posters have been on display at prominent sites across the region, including bus stops and billboards. 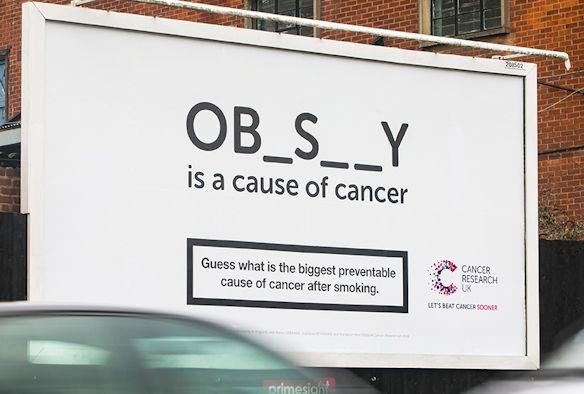 The campaign highlights the gaps in people’s knowledge where, like a word game, missing letters in the word ‘obesity’ challenge the public to guess what is the biggest preventable cause of cancer after smoking.

PODCAST: Dr Emma Boyland’s podcast in which she discusses the loopholes in junk food advertising regulations can be found here.

REPORT: The full report, entitled ‘See it, want it, buy it, eat it – How food advertising is associated with unhealthy eating behaviours in 7-11 year old children’, can be found here.