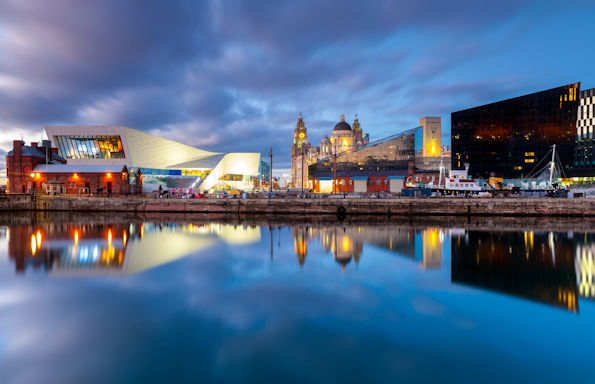 You may be new to the city, or perhaps you are not so new to the city, but you still do not know about the local history! If this is the case, the Museum of Liverpool is the place to go for everything Liverpool-related.

The museum contains exhibits on local music, sport, popular culture, history, as well as the city’s international relations, which are all housed in a strikingly modern museum on the famous Liverpool waterfront.

Highlights include: The Lion locomotive, which was one of two trains on the Liverpool and Manchester Railway – the oldest steam-powered railway in the world. Another highlight is the life-sized replica of the Liver Birds, which overlooks a stunning view of the original models that still stand atop the famous Liver building.

Speke Hall is a wonderful day out no matter what season. Enjoy the crisp crunch of leaves under foot during the autumn, or even the roaring Tudor fire during the winter months.

This 16th century Tudor mansion has a rich and vibrant history and once belonged to the Norris family. Be careful not to bump into the notorious White Lady, who is said to roam the grounds in search of her family.

Highlights include: A priest hole, which was used to hide priests after the English Reformation. There is also an Eavesdrop, which would have allowed servants to listen to the conversations of visitors waiting to be allowed into the house. Make sure to find out the names of the two huge trees that overlook the Hall’s courtyard.

We're taking part in @heritageopenday on Sat 15 Sept and that means free entry for all! Come and explore the Tudor hall, try out the woodland walks and play areas, discover The Bell Tree and sample our award winning scones. Learn more about Speke at https://t.co/K7dsIUiQFP #HODs pic.twitter.com/wFKyuCvkMT

The World Museum has something for everyone! This vast museum contains everything from dinosaurs to rockets, telescopes to totem poles, and even Ancient Egyptians to animal remains. The museum is lucky to contain many nationally renowned collections due to the donations received from many other institutes and figures in the city, including, but not limited to: the University of Liverpool, Liverpool Royal Institution, 13th Earl of Derby, and the Bidston Observatory.

Highlights include: A newly-renovated ancient Egyptian gallery, which contains the UK’s single largest collection of ancient Egyptian artefacts outside of London. If you are particularly observant you’ll even spot a modern interpretation of what the word Liverpool would look like in hieroglyphs. Also, if you have a spare 30 minutes don’t forget to visit the planetarium which is located on the top floor of the museum.

For those students living off-campus, a museum closer to home is Sudley House. If you live at Greenbank Halls it is only a 15-minute walk, and from Carnatic Halls it is even less time at around five minutes.

The house was originally owned by Liverpool-renowned philanthropists George Holt and his daughter Emma Holt. George Holt was a merchant who put money into improving social and welfare conditions in the city, as well as donating large sums of money to the University College which later became our very own University of Liverpool. His daughter Emma Holt promoted the welfare of female students, and further continued her father’s work by becoming a governor to the University.

Highlights include: An impressive collection of art that includes notable works by Turner, Gainsborough, Parkes Bonington, Landseer, Millais, and Reynolds.

The Garstang Museum is truly an on-campus gem at the University. The museum houses the finds of archaeologist John Garstang, who excavated in Egypt, Sudan, Turkey, Syria, Palestine, Greece and Prehistoric Europe.

If you would like to arrange a visit to the Museum or go on an expert-led guided tour, the museum can be contacted on 0151 794 6793 or via email.

Highlights include: The beautiful box-coffin of Userhat that can be paired with an inner coffin displayed at the Fitzwilliam Museum in Cambridge. The coffin displays rich and vibrant decorations that have managed to survive over 3,800 years of history. Another firm favourite with visitors is the Meroitic collections of Sudan. This is the biggest collection of its type in the UK, which contains a portable ancient sundial and a beautifully carved statuette of a lion.

Looking for something different this summer? Discover the ancient world, try our treasure trail, and come face-to-face with an ancient Egyptian mummy! #summerholidays #hiddengem #visitliverpool

A post shared by Garstang Museum of Archaeology (@garstangmuseumofarchaeology) on Aug 11, 2018 at 10:58am PDT

Visit the Garstang Museum, open from 10am-4pm today and tomorrow to find out more about the ancient world and explore classical history!

And make sure to join us for @LightNightLpool this Friday to discover the ancient Egyptian art of mummification…#itsmuseumtime #lightnight pic.twitter.com/xhr5VoFWUT