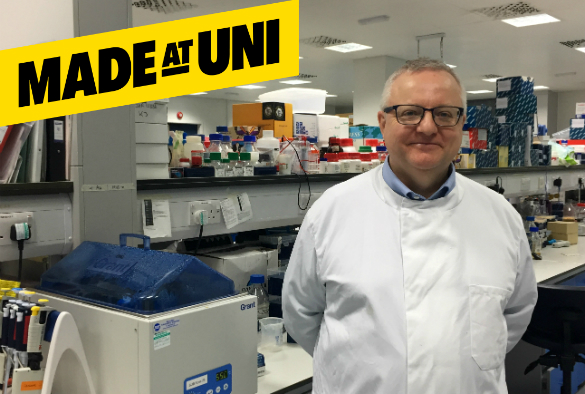 Life-saving research from the University of Liverpool into rotavirus, the leading cause of severe childhood diarrhoea, is today being celebrated as one of the UK’s 100 best breakthroughs for its transformational impact on child health across the world.

Work led by Professor Nigel Cunliffe at the Institute of Infection and Global Health has played a key role in the introduction and evaluation of a vaccine for the highly infectious stomach bug, which kills around 200,000 infants and children each year and hospitalises many more.

The UK’s Best Breakthroughs list demonstrates how UK universities are at the forefront of some of the world’s most important discoveries, innovations and social initiatives. It was compiled by Universities UK as part of the MadeAtUni campaign to change public perceptions of universities and bring to life the difference they make to people, lives and communities across the UK.

Professor Cunliffe said: “I’m absolutely delighted that our rotavirus work has been chosen as one of the UK’s top research breakthroughs. It’s all down to the incredible team effort of colleagues here in Liverpool with our collaborators and partners from Malawi and across the globe.

“We have already seen a major decrease in illnesses, hospitalisations and deaths from rotavirus diarrhoea around the world, but there is still work to be done. This includes helping every child receive the best protection against rotavirus regardless of where they are born.”

Professor Dame Janet Beer, vice-chancellor of the University and president of Universities UK said: “Universities really do transform lives. The technology we use every day, the medicines that save lives, the teachers who inspire – all come from UK universities and the important work being done by academics.

“The UK’s Best Breakthroughs list is a testament to the difference that universities make to people’s lives and we want everyone to join us in celebrating the work they do.”

As part of the MadeAtUni campaign, every university in the country was invited to nominate the one thing from their institution which they believe has had the biggest impact on people, lives or communities. Over 100 universities submitted a nomination. The entries cover health, technology, environment, family, community, and culture and sport.

You can find out more about the UK’s Best Breakthroughs and the MadeAtUni campaign here MadeAtUni.org.uk