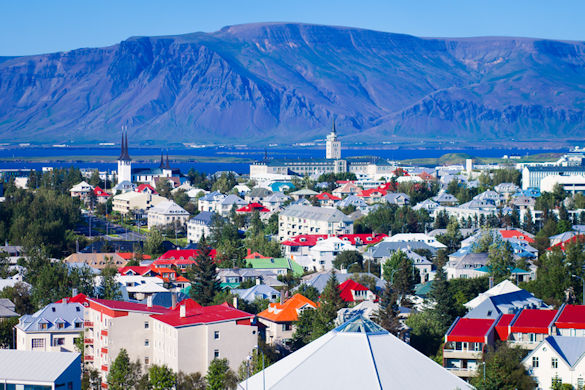 Over the summer myself and 11 fellow students, along with lecturers James Lea and Rich Chiverrell, spent two weeks in Iceland for our third year field course, conducting fieldwork and getting the chance to see a vast range of the amazing sites and landscapes Iceland has to offer. After managing to make our own way to Iceland, we spent the first night in Reykjavík, spending the evening exploring the colourful city and enjoying some food and drinks in the local restaurants and bars before the trip officially started.

The next morning we all met with Rich and James at 8am – ready to embark on a six-hour drive to our first site Skálafell, in the South East of the country, where we spent the first half of the trip. On the way we stopped at many of Iceland’s most famous and incredible sites. These included; Skógafoss, a 60m high waterfall where we all got rather wet walking up to its plunge pool, and Svínafellsjökull – which for many of us was the first time we had seen a glacier in real life and filled us with excitement for the rest of the trip. The drive gave us the opportunity to see the varying landscape Iceland has to offer, with expansive lava fields being a particular highlight. Our final stop was Iceland’s famous iceberg lake – Jökulsárlón, filled with icebergs stretching from the glacier front and out into the sea. Once we arrived at our hostel, we spent the evening cooking group meals, which we continued to do for the rest of the trip. We were also lucky enough to be able to see the northern lights whilst staying here, which we’d all been hoping for during the trip.

The next two days were spent at Skálafellsjökull and Heinabergsjökull, being introduced to the geomorphology of the area and trying out different fieldwork techniques which we could use when conducting our fieldwork later in the trip. We focused on the moraines within the sandur system to reconstruct past movement and extent of the glaciers, looked at how the landscape may have been shaped and changed by large events such as glacial floods and also at the contemporary processes occurring both within the glacier and at the ice margin, linked to its hydrology. We even managed to take part of an iceberg from the proglacial lake back to enjoy with our drinks at the hostel in the evening. After spending a morning discussing our ideas for our individual projects we split into groups and spent two days conducting pilot studies. Conducting fieldwork in such close proximity to the glaciers was an incredible experience unlike any fieldwork we had done before, and despite the slightly wet weather over these days they are ones which we all thoroughly enjoyed.

The second half of the trip saw us move to our next site based at Svínafell, on the way we stopped off at another amazing glacier and iceberg lake – Fjallsárlón. Here we spent the day admiring the glacier and icebergs, whilst also looking at the geomorphology of the area and discussing the possible history of the glacier.  We even saw the glacier calving into the lake which was definitely a highlight and a very exciting way to end our day.

For the rest of the trip we were conducting our fieldwork at Virkisjökull-Falljökull. My group focused on the diurnal variations of the hydrology of Falljökull, which gave us the opportunity to work right at the ice margin, measuring the changes within the proglacial stream over 11 hours through the day to understand the dynamics of glacier melt. Another group was based in the moraine system, looking at the primary succession within the area and conducting lichenometry – measuring over 4000 lichens to map the timings of the retreat of the glacier. The final group were based in the outwash plains from previous Jökulhlaup events, measuring lichens and rock hardness, along with boulder sizes, to calibrate the ages of these events and the flow velocities of the floods.

The drive back to Reykjavík on the final day was equally as good as the drive down. We had the opportunity to walk around the immense Gullfoss waterfall, and had another quick stop at Jökulsárlón. We stopped off at Iceland’s famous geysers which we saw erupt multiple times, whilst also making the mistake of standing down wind of them and getting rather wet. We also saw and drove through the mid Atlantic ridge which was a brilliant way to end the trip.

Our field trip to Iceland provided us with first-hand experience working in ice marginal areas of glacial systems and allowed us to fully immerse ourselves into the landscape to understand the many processes constantly changing the environment. Conducting this fieldwork was a fantastic experience and being able to work so closely to these active glaciers was a once in a lifetime opportunity, which we will never forget.

*This blog was originally posted on the University of Liverpool Geography Blog.