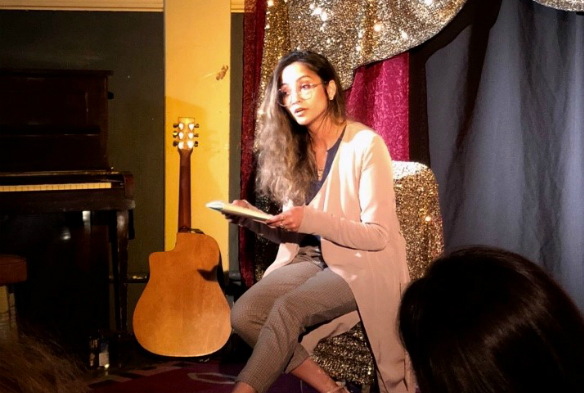 Lida Amiri is a PhD candidate in the School of Histories, Languages and Cultures.

“In a post-9/11 world, one-sided media attention has simplified Afghanistan’s history and identity. Media stories about this country have focussed on the ‘war against terror’ and recent refugee movements, creating a binary narrative of a country that in fact has a complex history, multi-ethnic population and rich artistic heritage. Hence, I claim in my research that one cannot disregard a society’s past and present artistic production.

I decided to focus on Afghanistan’s rich culture, particularly literature published by members of Afghanistani diasporic communities, because I wanted to expose and go beyond the binary narrative on the country, which switches between victimisation and terrorism. What I find fascinating is juxtaposing works by prominent authors like Khaled Hosseini and Atiq Rahimi, working respectively in English and French, both of whom reach out to different readerships. Fiction allows the general public, outside diasporic communities, an insight into a largely unknown Afghan culture which my thesis examines to uncover. My multifaceted study varies from studying intertextual references to Persian high literature to challenging the fundamentalist trope introduced during George W. Bush’s political era.

It was long before the start of ‘Operation Enduring Freedom’ that my parents fled to Germany, where I was born and completed my school education. Afterwards, I pursued my academic studies with a focus on narratology under Prof. Roy Sommer’s supervision and worked as his student research assistant for several years at the University of Wuppertal. With scholarships ranging from the Fulbright to Friedrich-Ebert-Stiftung, Deutscher Akademischer Austauschdienst and the Melbourne International Research Scholarship, I was able to study at Université de la Sorbonne Nouvelle (Paris III) and also to gain teaching experience at Webster University (St. Louis) and the University of Melbourne. It was at the latter academic institution that I started my PhD before moving to the University of Liverpool to obtain a degree in Comparative Literature funded by the Funds for Women Graduates. With my detailed knowledge on literary theory and linguistics in English, French, and German, there was no question that I would not pursue a PhD studying fiction. My choice to pick translingual literature by authors of Afghanistani background in Farsi/Dari, French and English, which I used to read in my spare time outside university, added a personal touch that has turned this thesis into a wider contribution in which I explore how different worlds can, against all prejudices, meet in critical harmony.

My contribution as a PhD student is not only limited to my thesis, but also involves coordinating events to engage with academics and the general public. Earlier this year, I organised a public event as part of the ‘Writing on the Wall Festival’, titled ‘Refugees in Literature, Film, Art and Media: Pespective on the Past and Present’. This interdisciplinary workshop gave a platform to academics, artists and activists to engage in the heated debate on the current refugee ‘crisis’. With this international event, I was able to provide space for former refugee Nasruddin Saljuqi to introduce Afghanistan’s past through an artistic lens. It was also a golden opportunity to listen to Prix Goncourt-winning author Atiq Rahimi’s keynote in French, in which he shared a reflection on the value of artistic productions. A range of performances by established members of the Afghan Diaspora succeeded in challenging the widely disseminated victim-narrative associated with refugees. Apart from this event’s academic and artistic merit, it was my personal highlight to re-connect old friends, Atiq Rahimi and A/Prof. Wali Ahmadi (University of California, Berkeley), who were at school together about 40 years ago, but were forced to part ways, like so many others affected by the war in Afghanistan. 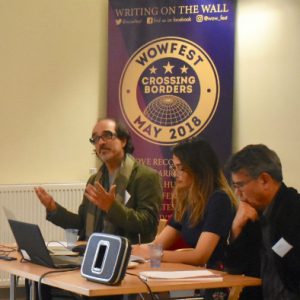 Setting up this international workshop seemed like an insurmountable task that, unbeknownst to me at the time, I had already prepared for when budgeting ARC applications for academics at the Faculty of Arts at the University of Melbourne. At the workshop’s post-keynote discussion with Atiq Rahimi, I chose to act as interpreter for French and Farsi/Dari. A multilingual speaker occupies a position of privilege when being able to communicate thoughts, ideas and opinions in the language which describes it most accurately. Equipped with this knowledge, I knew that Rahimi would benefit from an interpreter for both languages who could also add cultural references for the international audience in the room. Based on my experience as a student research assistant translating German, French and Farsi/Dari at the University of New South Wales Sydney, I took the risk, that I did not regret, of acting as an interpreter for the first time at the workshop.

To continue a debate only just begun at the workshop, I also organised the interdisciplinary panel ‘Lights in the Distance – Migration History on our shores’ which, as part of as part Writing on the Wall festival Black History Month programme, explored the broader issue of migration from the West Indies to Central Asia. To explore parallel storylines relating to past and present migrants, I was in conversation with journalist Daniel Trilling, Dr. Kathy Burrell, Dr. Arshad Isakjee and PhD candidate Emy Onuora. We succeeded in exploring overlapping themes and uncovering how history repeats itself in terms of the inhumane treatment of people, whether of the refugee ‘crisis’ or the Windrush scandal. 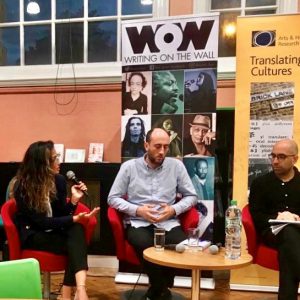 Migration, media stories and artistic production are all components of my PhD thesis titled ‘Re-thinking World Literature and Diasporic Writing: the Case of Afghanistani Translingual Authors Khaled Hosseini and Atiq Rahimi’.  With this comparative study, I claim that contemporary studies of World Literature are predominantly focussed on the sociology of literature and not its distinctive poetics. It is my contention that studies on World Literature would benefit significantly from exploring literary strategies aimed at broadening the current definition of translingual authors living in diasporic contexts. Intending to introduce academics to a new perspective on Afghanistani translingual authors, I have already presented my research at The University of Sydney, SOAS University of London, Université de la Sorbonne (Paris IV), The University of Melbourne, The University of Oxford, The University of Leeds and The University of Berlin. My thesis is informed by narratology, postcolonial and media studies, I aim to foreground different literary and linguistic strategies for a more heterogeneous view of Diaspora writing. By interpreting artistic voices, we can break with the usual narratives and resist the binaries of victimisation and terrorism that give a distorted image of countries like Afghanistan and of their people.”

More
Becoming an expert: From rock to bacteria