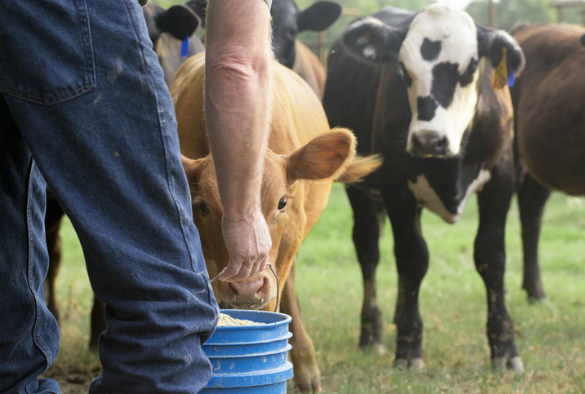 Dr Camille Bellet is a Research Associate at the University’s Institute of Infection and Global Health.

Yet when the World Health Organisation (WHO) officially declared in 2001 that antimicrobial resistance was a “global problem” for both humans and animals, the link between animal farming and human health could no longer be ignored.

Since then, significant public investments and political actions have been taken around the world to limit the use of antimicrobials in animal farming and raise awareness of the risks and problems related to the medicalisation of animal production.

Drugs have been instrumental to the modernisation of agriculture and are fundamental to the production of abundant and cheap food. In animal farming, drugs not only improve the health and growth of farmed animals, but are also part of the strategies employed by the food industry in order to produce more food for more people.

Contrary to what most newspaper headlines seem to suggest, antimicrobials are not the only drugs excessively used in animal farming. The intensive use of anthelmintics – a group of antiparasitic drugs – to prevent or regain production losses from multiple parasitic worms, has also progressively led to an increase in parasitic worm (helminth) resistance to available drugs in animal production. However, unlike antimicrobials, the crisis of this resistance in humans has been limited to the global south and neglected tropical diseases. Given the invisibility of their implications in the global north, anthelmintics are still massively consumed in animal farming.

Since the beginning of the debate on drug resistance, many groups and voices, especially urban elites, have spoken about the medicalisation of animal farming, each offering its perspective and putting forward their preferred solutions: stopping animal farming in specific countries, regulating the use of antibiotics in farming, developing new antibiotics, vaccines and diagnostic tests, promoting biomedical research, developing lab-grown meat, educating veterinarians, and educating farmers.

Because of their portrayed “ignorance”, farmers became stigmatised and their practices framed as part of the problem of drug resistance in the city. Associations, decision makers, the pharmaceutical industry, the food industry, experts and health professionals all called on farmers to stop using drugs in farmed animals, pushing the rhetoric towards the idea of an end to animal farming.

Farmers must have a voice

Talking with livestock farmers across the UK, my recent research reveals that decisions made by farmers on the use of drugs in animal farming are not governed by ignorance. Instead, they are shaped by what farmers consider as appropriate practices for maintaining the well-being of their livestock and the tradition of rural professions – besides more mundane aspects that help farmers ensuring the sustainability of their businesses.

In fact, the use of drugs by farmers is situated within a larger context of animal production systems and food demand, which themselves contribute to the emergence of animal diseases, the medicalisation of animal farming and drug resistance.

Urban elites often see farmers as “technicians” and the farming community as a ground for applying what is considered the best practices for improving animal health, welfare and the sustainability of the food industry. This denial of rural agency has been happening for some time and has led to an increasingly visible social divide between urban and rural. This social dislocation has recently been demonstrated in France with the gilets jaunes (yellow vests) movement.

Sadly, urban elites tend to disregard the fact that farmers are the ones closest to the land and their livestock, and have everything to lose by not taking care of it. If public authorities are serious about tackling drug resistance and supporting animal well-being, sustainable food production and local economies, when it comes to farming, farmers should be the first we listen to.