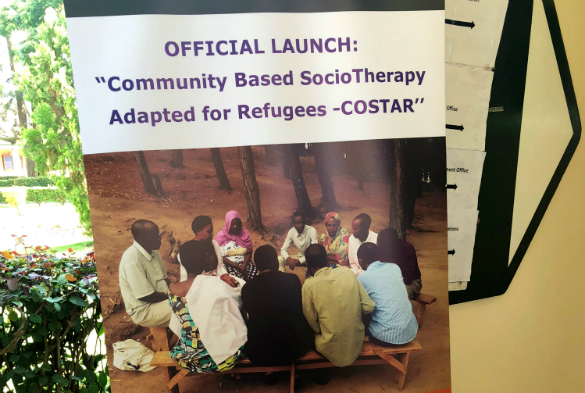 Dr Ross White is an Associate Professor of Clinical Psychology in the University’s Department of Psychological Sciences.

“The United Nations Refugee Agency indicated that, as of the end of 2017, 68.5 million people across the world had been forced to leave their homes. Of all the continents, Africa hosts the largest number of refugees. Conflicts in countries such as South Sudan and Democratic Republic of Congo have led to substantial numbers of people seeking refuge in neighbouring countries. Uganda, for example, hosts over 1.4 million refugees. Relative to other continents, Africa also has the highest proportion of ‘low-income’ countries. (as classified by the World Bank). So countries that receive the largest number of refugees are often those that have the least resources to support their needs.

Relative to indigenous populations, refugee populations experience elevated rates of mental health difficulties, including disorders such as depression and post-traumatic stress disorder. Factors associated with these higher risks of mental health difficulties arise during three distinct periods: 1) before migration (e.g. from exposure to war, torture and persecution); 2) during migration (e.g. due to exploitation, lack of basic needs, violence and injury), and 3) after migration (e.g. from discrimination, uncertainty about asylum status, and socioeconomic deprivation). An important point to emphasise here is that factors associated with day-to-day living, in addition to previous potentially traumatic events, can impact on the mental health of refugees. Indeed, it has been shown that reductions in post-migration living difficulties are associated with lower levels of depression and anxiety experienced by refugees.

In low- and middle-income countries, where the vast majority of refugees reside, there is a marked absence of highly skilled professionals available to deliver mental health support. In such settings, group-based forms of psychosocial support that can be facilitated by community members who receive training offer great promise. These approaches are socially acceptable and effective in treating common mental disorders, whilst also decreasing pressure on primary health care.

Concerns have been raised about the comparatively low quality of research studies investigating the efficacy of interventions for refugees and asylum seekers and a lack of sufficient research focus on what contributes to resilience in refugee populations. The recently launched Community-based Sociotherapy Adapted for Refugees (COSTAR) project that I am involved in, aims to address these issues through interdisciplinary research activity. The project is a collaboration of academic partners (University of Liverpool, Makerere University, University of Rwanda), the UNHCR, local non-governmental organizations (Community-based Sociotherapy Rwanda, Humanitarian Initiative Just Relief), and representatives of the refugee community. It aims to adapt and evaluate a group-based psychosocial intervention called Community-based Sociotherapy (CBS), which has been extensively used in post-Genocide Rwanda, by assessing its impact on the mental health of Congolese refugees in Rwanda and Uganda.

Following the recent COSTAR Project launch event in Kigali, Rwanda, we visited Gihembe refugee camp, which will be one of the recruitment sites for the research. The camp manager (a representative of the Ministry in Charge of Emergency Management, Rwanda) informed us that 13,340 people are living in 44 villages densely packed into a hilltop location. What struck us most during the visit was the vast number of young children in the camp – children who were bearing the brunt of political upheaval and conflict occurring hundreds of miles away. An oft’ cited African proverb states ‘it takes a village to raise a child’. This emphasizes the important role that the community can play in helping people to develop throughout their lives. We hope that the six phases of community-based sociotherapy (i.e. Safety; Trust; Care; Respect; New life orientation, and Memories) that we are evaluating in the COSTAR project will help to build brighter futures for the people living in Gihembe.”

Adapted from a blog post originally written for the charity Evidence Aid.