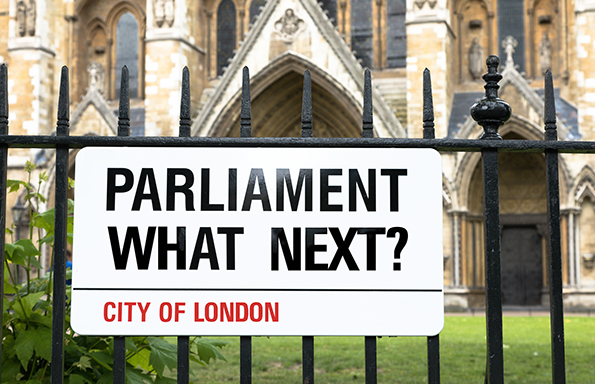 There is extreme uncertainty about what happens after the rejection of the Prime Minister’s Brexit deal.  Given the incredibly heavy defeat by a margin of 230 votes, this current version of the withdrawal agreement and declaration on the future relationship will clearly need to be altered if it is to gain the support of a majority in the House of Commons. The scale of the defeat shows it was a significant miscalculation for the PM to delay the original vote scheduled for 11 December 2018 until January, which has meant the government has lost over a month which could have been used to develop a credible ‘plan B’.

But the essential framework of the withdrawal agreement is actually very difficult to change – the EU is firmly resisting reopening negotiations, and even if the political crisis in Westminster did prompt some discussion of changes to, for example, the duration of the backstop, the essential framework of the current deal, providing for a transition period, a settlement on citizens’ rights and the UK’s financial obligations, would probably form much of the basis of any other compromise.  So the deal and the government may be severely wounded, but this would probably still provide the technical basis for a modified negotiated exit deal with the EU, which looks set to be subject to a further Commons vote on 29 January.

It’s almost impossible to predict what happens next, because there is no single option which clearly attracts the support of MPs in the House of Commons.  After a large defeat on a major policy issue, it was inevitable that the opposition would move a vote of no confidence in the government.  If successful, that would have triggered a 14 day period in which either the current PM would resign, try to regain the confidence of the Commons, or a new government might be formed.  If none of these things had happened, we would move on to a new general election.

Yet this first vote of confidence was won by Theresa May’s government, because the PM’s own party and her minority partners the DUP would prefer to reject the withdrawal deal but keep the government in office, in the hope that we reach 29 March 2019 and leave the EU without a deal.  With her position confirmed for now, the PM will need to try to develop an alternative exit plan, although there is no barrier to further votes of no confidence being moved by the opposition if the PM’s attempts to find a deal fail.

There are a number of ways May might now proceed, perhaps holding indicative votes in the Commons to see what outcome a majority would support, or seriously negotiating with the opposition, which would almost certainly mean a shift in the exit deal from a backstop to a permanent customs union, which is Labour’s preferred basis for a future relationship with the EU.  The PM has now opened up to cross-party talks, but this has come very late in the day, given she leads a precarious minority government, and there has already been disagreement about how to implement the referendum for a number of years.

A second referendum might be a further option to break the parliamentary impasse, but this would need new legislation which would take more time, inevitably requiring an extension of the Art 50 exit process, and delaying the date of withdrawal past March. It’s not yet clear that there is a majority in the Commons in favour of another referendum, and it’s even less clear what options would appear on the ballot in that referendum, as there are multiple options – leaving with no deal, leaving with the PM’s deal, and remain – all supported by different groups of MPs.  To delay the process to hold a referendum would need the agreement of the EU, but there are external constraints too – the next round of European Parliament elections are in late May, with the new Parliament reconvening at the start of July, and delaying UK exit past these dates would create legal and political complications regarding whether the UK should be electing new MEPs.

A further referendum could also potentially lead to a result conflicting with that of the 2016 referendum.  Brexit has already been an incredibly divisive process, and the potential for competing referendum outcomes – in 2016 for leave, then subsequently for remain – could alienate those voters who felt their initial choice had been overturned.  We are in a broader period of democratic uncertainty in the UK, and it’s not clear that a second referendum offers a way to break through the current disagreement, because whatever the result, the status of the decision reached will be the subject of yet more political dispute.

Fundamentally, the current default option as matter of domestic and EU law is the UK leaving the EU without a deal on 29 March 2019, unless there is some other intervention – perhaps the biggest risk now, after May’s deal has been defeated, is that the UK will sleepwalk into a no deal Brexit.  Leaving the EU in this unmanaged way would create huge uncertainty, and represent a massive failure of government.