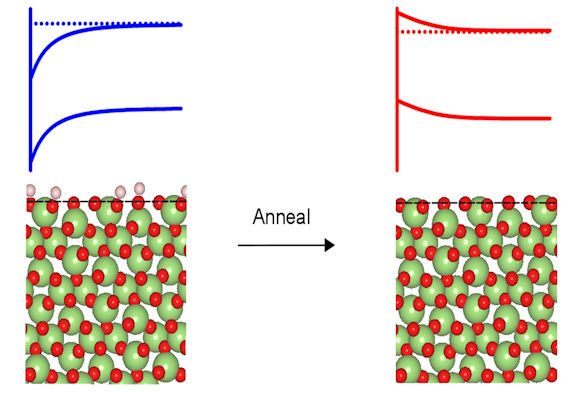 In a paper published in APL Materials, researchers report that the observation of downward band bending and electron accumulation is due to the presence of hydroxide, at the surface of gallium oxide.

The researchers found that this is not the inherent state of the surface of gallium oxide. When they used vacuum thermal annealing to clean the surface, its natural state is electron depletion. However, a two-dimensional electron gas accumulates on the surface due to the unintentional presence of hydroxide, which provides an extrinsic source of surface donors.

Since the 1990s, gallium oxide has been an effective gas sensing material. Recently, it’s also garnered interest as an oxide semiconductor with an ultra-wide energy band gap, about 4.7 eV at room temperature, which makes it a promising material for many applications, including high power electronics and solar-blind ultraviolet detectors.

But fundamental properties of gallium oxide remain unknown, especially about its surface electronic behavior, which determines a material’s interfacial properties for heterojunctions and metal contacting.

Most n-type semiconductors have surface electron depletion layers and upward band bending. The team put the surface electronic properties of gallium oxide into the context of other post-transition metal oxides.

Professor Tim Veal, from the University’s Department of Physics, who is a co-author on the paper, said: “Our work suggests that previous data has also indicated electron accumulation is often present at the surface of gallium oxide, but this detail has previously been overlooked.

“These results also provide evidence that changes in conductivity of gallium oxide during gas sensing are caused by changes in surface electronic properties.”

“This is an exciting new finding and enhances our fundamental understanding of gallium oxide which will assist in the development of a range of applications of the  material including, for example, in power electronics where it could help to improve electric vehicles.”

The paper `Transition from electron accumulation to depletion at β-Ga2O3 surfaces: The role of hydrogen and the charge neutrality level’ is published in APL Materials doi.org/10.1063/AIPkey