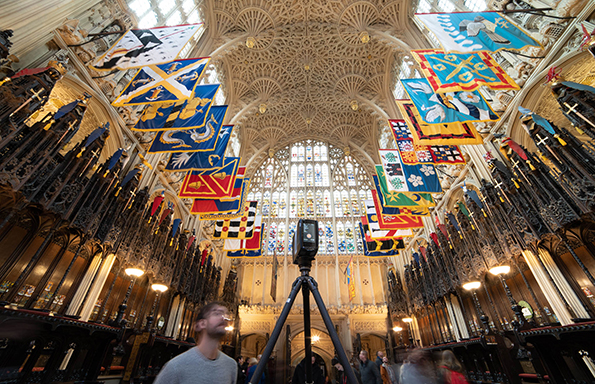 We travelled to London to undertake a digital survey of the medieval vaults of Westminster Abbey and the Victorian reconstructed vaults of the undercroft of the destroyed St Stephen’s Chapel beneath the Palace of Westminster, as part of the AHRC-funded ‘Tracing the Past’ research project. Vaults represent a high point of medieval architectural design in terms of creativity and structural innovation. Our project is using digital technologies to identify and explore the geometries of medieval vaults at key sites in England, enabling new readings of gothic design and construction. As vaults are located high up in church and cathedral interiors pre-digital precise surveys were slow and prone to inaccuracies, but aided by digital tools we can now ask questions that were once difficult to answer.

Westminster Abbey, perhaps the best known church in the UK, offers a number of valuable opportunities to the project. Whilst most of the hundreds of thousands of visitors each year pay homage to Britain’s illustrious dead buried there, architectural historians continue to argue over whether the nation’s mausoleum owes more to France than to England. Our research will enable us to compare Westminster’s vaulting with other sites both in the UK and in France to explore the ‘Frenchness’ of its design. 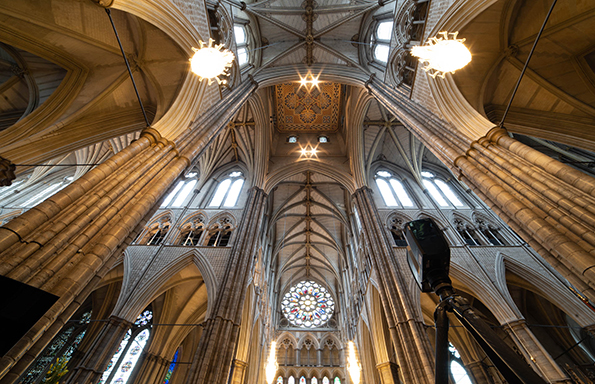 Furthermore, the chapter house and cloister vaults have previously been identified as having unusual 3D geometries, so we will use our digital data to investigate this. As a royal project, Westminster is also unusually well documented in the records of the King’s Works, throwing further light on the building sequence, the identity of the designers and details of construction methods. From such records, we know that the medieval masons plotted their designs on a full size ‘tracing floor’, from which moulds were cut for the individual blocks of stone and the wooden formwork by which the ribs were supported during construction.

St Mary Undercroft, formerly the crypt of St Stephen’s Chapel in the Palace of Westminster and now the place of worship for the Houses of Parliament, is another well-documented royal work, started by Edward I. Its vaults take an innovatory ‘lierne’ form, with extra decorative ribs which have been claimed as the earliest liernes in England. Although now largely a Victorian reconstruction following the great fire of 1837 which destroyed most of the medieval palace, measurements were taken from the medieval vaults prior to demolition. Our digital survey will be used to compare the measurements of the demolished medieval design with the current Victorian reconstruction and possibly identify elements of original medieval fabric lurking beneath the Byzantine-style paintwork. 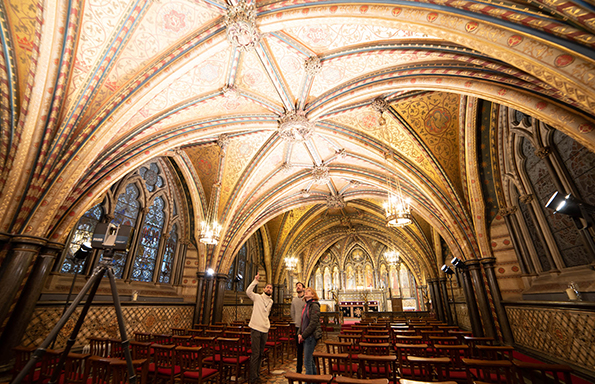 The two surveys add to a growing list of case study buildings that will be individually analysed, as well as offering comparisons between sites. We use laser scanning to form the digital survey, giving a highly accurate and detailed model of the vaulted ceilings. Next, we create wireframe models and geometry datasets of the vaults to document key features. We are able to ‘flatten’ these models to reconstruct the tracing floor to gain insights into how the vaults were planned. Following this, we can hypothesise how the 2D plans were pushed into three dimensions via a process of ‘reverse engineering’.

We are currently making good progress with analysis at our case study sites of Exeter, Ely and Wells cathedrals, and will begin investigations using the Westminster Abbey and St Stephen’s Chapel data later this year.

All photographs by JR Peterson.