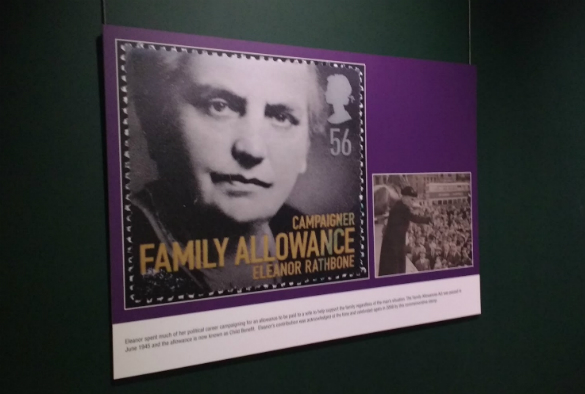 The University is holding a number of free events to mark International Women’s Day this Friday including a public lecture about Eleanor Rathbone, one of Britain’s foremost campaigners for social justice, and a special coming-together of School of Architecture female alumni from the 1940s – 2010s.

There’s also plenty of activity planned on social media in the form of blogs, interviews and videos. Follow #LivUniIWD for International Women’s Day highlights from across the University.

The Liverpool School of Architecture (LSA) is hosting an ‘in conversation’ event with female alumni from across the decades who will talk about about their varying careers and experiences.  Women have excelled at the LSA  for nearly a century and as early as 1925, student Frances Thelma Silcock was awarded the highest national prize; the RIBA Silver Medal. Panellists include the School’s oldest living alumna, Joy Hockey,  who has recently been awarded the MBE in the New Year Honours List. Find out more and book your place.

Amanda Draper, Curator of Art and Exhibitions, is hosting a special tour of the ‘She’s Eclectic: Women Artists of the VG&M Collection’ exhibition, which showcases the diverse mixture of artwork by women artists in our collection. Some of the women artists represented in the collection are world famous, such as Bridget Riley, and others are less known but still talented and interesting. Some are local, some are international. It’s an eclectic mix. Find out more and book your place.

Janet Wolff, Professor Emerita of Cultural Sociology at the University of Manchester, will give a personal reflection on aspects of Eleanor Rathbone’s life and work, seen through moments in her own family history. This includes Eleanor’s political work on behalf of refugees in Britain in the 1930s and early 1940s and later on as as collaborator and ally of Ernest Simon in Parliament on questions of housing. Find out more and book your place.

Eleanor Rathbone was one of the most remarkable British women of the 20th Century. Born into a prominent Liverpool family, she spent her career fighting against injustices and trying to make life better for those in need. This exhibition celebrates her remarkable achievements and is drawn from the extensive Rathbone Papers held in the University of Liverpool’s Special Collections & Archive. Find out more.

EXHIBITION | Benefactresses – Women of the Holt Family
Running until 2019, Victoria Gallery and Museum

The role of women in the University of Liverpool’s history is often overlooked. This exhibition turns a spotlight on  cousins Eva Melly, Emma Holt and Jane Brandreth Holt, who were patrons of the University in its early years. They were part of the Liverpool-based Holt family whose wealth stemmed from their merchant and shipping businesses. The trio used their privileged position to support study at the University, especially for women. The exhibition features rarely seen portraits of the women from the VG&M collection. Find out more.

You can find out more information about our International Women’s Day events on our #IWD2019 webpage.