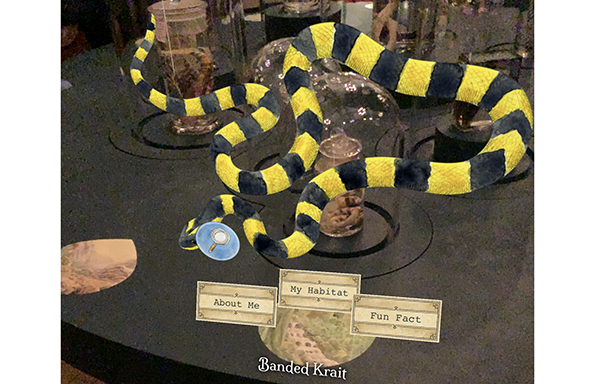 Developed by the University’s Mobile Development Team, the Nightmares in a Bell Jar app is available to download on both Apple and Android devices.

It has been developed to provide visitors with an as close to real life encounter as possible with the creatures and critters stored in each receptacle, as well as helping educate users about how they lived in the wild.

Using original artwork created specifically for this purpose, the app allows guests to study the animals closely using the built in magnifying glass, and see how they would have looked and behaved.

Nicola Euston, VG&M Head of Museums & Galleries, said: “This app has been really fun to develop and we’re really excited to see how our visitors react to experiencing these critters as they would have appeared in real life.

“The Mobile Development Team has been fantastic throughout the project and we’re really looking forward to working with them again, to see what other apps we can develop around our extensive collections and displays.”

Once downloaded, users simply point their devices at the display and watch the ‘nightmares’ come to life. They can study each creature’s features up close, see how they move and learn new facts and information about how they lived prior to being bundled up in a museum bell jar.

“This is our first Augmented Reality app so there have been several challenges along the way, but we are really proud of the finished product and see great potential for extending its functionality to other exhibitions in the future.”

The Nightmares in a Bell Jar app was launched at a special event held at the VG&M.

Find out more about how the Nightmares in a Bell Jar app was made, and how you can download to your device, at http://vgm.liverpool.ac.uk/news/stories/title,1111759,en.php