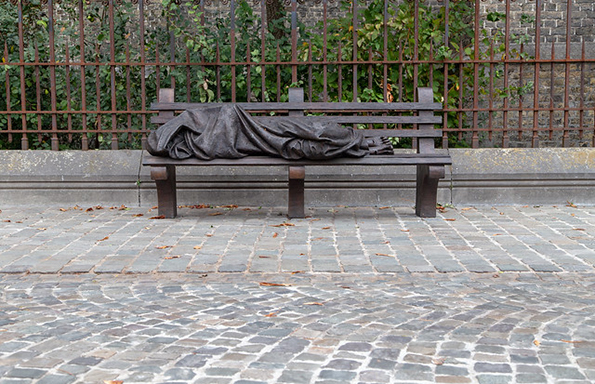 The Homeless Jesus statue in Brugge

Professor Michael Parkinson – the University of Liverpool’s Associate Pro Vice Chancellor for Civic Engagement – chaired a special event considering the issue of homelessness in the city.

Attended by representatives from public, private and the third sector, the conference was organised by Liverpool Parish Church in collaboration with Community Foundation Merseyside.

Both Metro Mayor, Steve Rotheram and City of Liverpool Mayor, Joe Anderson spoke at the event, which culminated in the unveiling of the Homeless Jesus sculpture in the gardens of St Nicholas Church.

Professor Parkinson said: “This was a really high quality affair on a really important topic. The calibre of the speakers, the presentations and the debate that followed was very high.

“People really valued the role of the University as convener, with me as chair. It showed our commitment as an anchor institution to leading the public debate about the critical issues facing Liverpool City Region

“There were a series of powerful observations and challenges form the public and private sector about how we should build upon the good work we are doing – while recognising the scale of the problem.”

Delegates agreed to form a Task Force with the private sector to develop an action plan to help tackle the causes of homelessness, identified as the need for more social housing and a more supportive welfare system.

Rae Brooke, CEO of Community Foundation Merseyside, said: “Homelessness and rough sleeping require a shared approach of the public sector, private sector, third sector and wider community if we are to address this issue head on and improve the lives of others.”

The Rector of Liverpool, the Revd Canon Dr Crispin Pailing, said: “The unveiling of the sculpture in the city centre’s most popular green space will present us with a daily challenge.

“There is space for you to sit on the bench; would you choose to sit next to a homeless person? Would you sit on a bench next to Jesus?”

The sculpture was revealed by residents and service users of Liverpool YMCA, and was blessed by the Bishop of Liverpool.