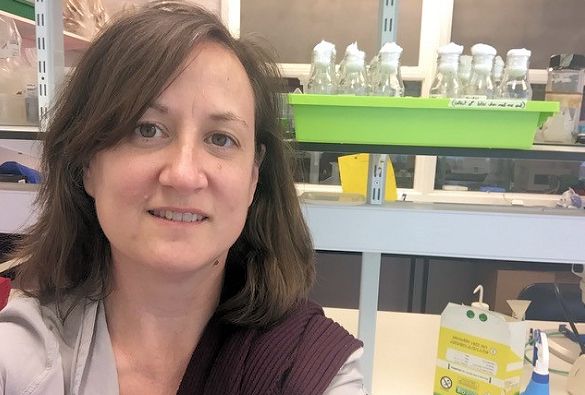 The Institute of Integrative Biology is leading on a new project to investigate the evolutionary genetics of transposable element invasions.

The five-year study is being supported by a prestigious £1.77m European Research Council Consolidator Grant that was awarded to Dr Andrea Betancourt in the most recent round of funding.

Transposable elements (TEs), commonly referred to as ‘jumping genes’, are mobile segments of DNA that can move from one position to another within a genome, sometimes causing mutations where they land.  Several famous mutants are due to transposable elements, includingthe black form of the peppered moth, which spread rapidly during the Industrial Revolution.. While this transposable element insertion benefited its host species, often these mutations harm host genomes, and they may underlie some genetic diseases.

However, in spite of causing harm to their hosts, transposable elements persist in evolution.  The reason is that, while an individual host may evolve immunity to a transposable element, the element can escape this immunity by jumping from one host species to another. These ‘invasions’ of new hosts are currently not well-understood, and the aim of the study is to learn more about them.

Project Lead, Dr Betancourt said: “Currently, not much is known about how TEs transfer to new hosts, or how they affect their new hosts. This is surprising, as TEs are a really important component of genomes; some genomes have more transposable element DNA than DNA from any other source. We’re going to try to help fill in these blanks—looking at how TEs move between species, and how hosts adapt to the arrival of a new parasitic gene.”

The study will combine new genomic techniques with classical genetics and molecular biology. Dr Betancourt’s previous research has tackled a wide variety of questions in evolutionary genetics, addressing the role of recombination and sex-linkage in evolution, and the spread of selfish elements in Drosophila.

On the funding awards, President of the ERC, Professor Jean-Pierre Bourguignon, commented: “This ERC funding will allow ambitious scientists to establish or strengthen their teams in Europe and be truly creative in their research. Beyond a push to the grantees’ careers, this European support will offer an excellent working environment for younger researchers at doctoral and post-doctoral levels. We look forward to see many of these daring ideas come to fruition, to the benefit of Europe at large.”

Find out more about Dr Betancourt’s work at http://www.flyevolution.net/