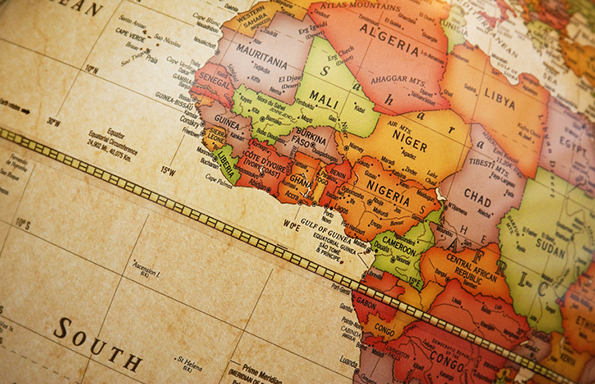 The University of Liverpool will partner with the University of Georgia (UGA) Research Foundation on a $4m US State Department funded project to reduce the prevalence of human trafficking in West Africa.

The Africa Programming and Research Initiative to End Slavery (APRIES) is an international consortium formed by UGA and Liverpool, and overseen by State Department’s Office to Combat and Monitor Trafficking in Persons as part of its Program to End Modern Slavery.

Professor Alex Balch, from the University’s Department of Politics, is Associate Director on the project. He said: “This is a really significant step for the University of Liverpool’s research profile and network in this area.

“It is recognition of the University’s tradition of research into historic and contemporary forms of slavery.

“This success is a direct outcome of the UGA-Liverpool staff exchange programme.

“Thanks to this programme we were able to co-write the application and put together a successful bid for a large project with a team that spans the US, UK and West Africa to address an urgent global challenge.”

Human trafficking, also known as modern slavery, is a persistent, worldwide problem hampered by lack of data for intervention efforts. Over the next five years, APRIES will collect data on the prevalence of human trafficking in parts of Sierra Leone and Guinea. The baseline research will support programs that seek to achieve a measurable reduction of modern slavery. If successful, the program’s methodology could serve as a model for similar efforts elsewhere.

“There has never been a systematic, research-based multinational effort as extensive as this to tackle the problem of modern slavery in Africa,” said David Okech, an associate professor in the UGA School of Social Work and the project’s director and principal investigator. “This is a challenge and also a great opportunity to execute truly transformational programs.”

According to the International Labour Organization, an estimated 25 million people worldwide are victims of forced labour. That figure is likely an underestimate, said APRIES researchers.

Statistics are acutely needed in Africa.

Jody Clay-Warner, Professor of Sociology in the Franklin College of Arts and Sciences and an associate director of the project, said: “There are limited data in Guinea and Sierra Leone on the prevalence of modern slavery.

“The award provides us the opportunity, at a minimum, to fill this gaping hole to inform policy and programming.”

The APRIES team will work with ResilientAfrica Network, a USAID-funded partnership of 20 African universities based at Makerere University in Uganda, to collect, analyse and establish robust baseline data on the prevalence, impact and service gaps of human trafficking in certain sectors in Sierra Leone and Guinea.

Using a collective impact approach, local implementing partners will amplify the effort by using the findings of the research in anti-slavery operations and programs that help trafficking survivors. Implementing partners will be openly and competitively selected on their ability to execute well-designed, measurable programs. The project will not replicate or create overlaps with existing anti-trafficking efforts.

APRIES members have a proven record of anti-trafficking research in sub-Saharan Africa, including the development of a model for the reintegration of female survivors of human trafficking; increasing transparency in labour supply chains in cocoa cultivation and garment manufacturing; and reintegrating former child soldiers in post-conflict zones.

These projects were made possible by the UGA President’s Interdisciplinary Seed Grant Program, the UGA Office of International Education, the Owens Institute for Behavioural Research, the National Institutes of Health, the National Science Foundation, the UK’s Arts and Humanities Research Council (AHRC) and the British Academy.

For more information on the Office to Monitor and Combat Trafficking in Persons, visit https://www.state.gov/j/tip/