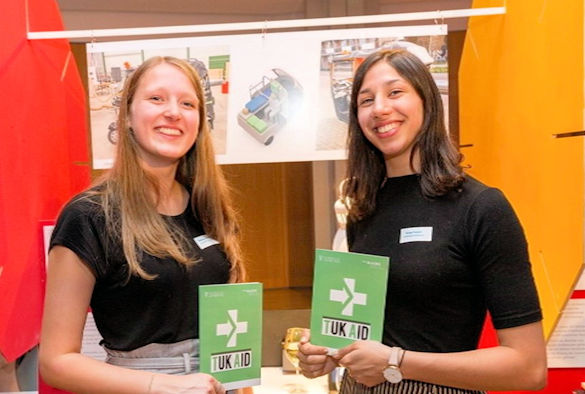 A student project to convert the most common vehicle in the developing world into a rudimentary ambulance has been presented at the British Embassy in Berlin this week (Tuesday, 14 May) as part of an innovative showcase that shines a spotlight on the deep and vital partnerships that exist between European academia.

The project, entitled TukAid, is a collaboration between mechanical engineering students from the University of Liverpool, Kiaya Pandya and Bethany Rushton, and industrial design graduates from the Hague University of Applied Sciences (Netherlands); working under the guidance of Médecins sans Frontier (Doctors Without Borders) MSF.

The most common vehicle in the developing world is the Tuk Tuk; one of the least common but most important is the ambulance which are expensive and challenging to deploy. The students have designed, developed and protyped a kit to convert a Tuk Tuk, into a rudimentary ambulance; a process that could be undertaken by any motor mechanic with common tools and materials. The kit includes medical and technical equipment, as well as a custom-made stretcher which can all be assembled in a basic mechanic’s workshop.

These type of ambulances are especially useful in disaster and refugee areas where immediate action is crucial. The students have formed the company TukAid to bring the technology to market.

The Showcase explored themes contributing to European priorities where partners are collaborating at the cutting edge of science and technology and education, in areas such as AI, sustainable product design, and health research.

Professor Dame Janet Beer, Vice-Chancellor of the University of Liverpool and President, Universities UK, said: “Irrespective of the outcome of the Brexit process, universities in the UK are committed to continue their deep rooted and ground-breaking academic collaborations with German and European academic institutions and companies. Collaborative research and teaching are a key component to UK HE’s success and is something we need to work hard to protect and nurture.”

The Showcase included examples of teaching and research collaboration between academic institutions and companies.

Kiaya Pandya, said: “We were delighted to be offered the opportunity to showcase our project at such a prestigious event. Our project aims to use converted tuk-tuks as ambulances for use as rapid response vehicles in a variety of situations and applications. They can be used in emergency situations to evacuate casualties from a building collapse, weave around traffic and rubble, or to ferry a pregnant woman from a rural area to hospital.”

Bethany Rushton, said: “This project, of which we are extremely proud, would not have been possible without our collaboration with European colleagues which has been vital. Together we have been able to design an appropriate, accessible and durable solution which could help save many lives in the future.”

Robbie Bulloch, Deputy Head of Mission, British Embassy, said: “We are delighted to support the work of BUILA and DAIA and to be hosting this Showcase at the British Embassy. Fostering links between Germany and the UK, within both academia and business, is an important role that we undertake at the British Embassy. Our future economic growth depends on collaboration. Personally, I’ve been amazed at the breadth of joint projects from artificial cells to excellence in teaching languages.”

The Showcase took place to coincide with the British Council’s Going Global Conference, where leaders in international education with be meeting to debate the future of higher and further education.