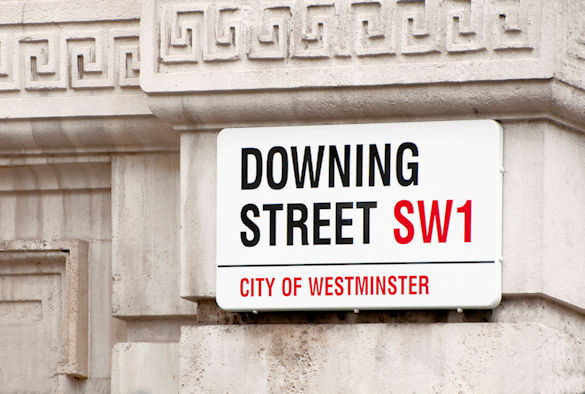 In the wake of the European elections, the bookies’ favourite to be the next Conservative Party leader, Boris Johnson was quick to tweet “It is time for us to deliver Brexit”. This followed an earlier statement of his that Britain “will leave the EU on October 31, deal or no deal”.

Johnson’s strong language appeared to put traders on high alert, with the pound dropping as a result. But it’s not just the risk of the pound dropping during the leadership race that could hurt the UK economy, it’s the volatility that comments from leaders like Johnson produce and the general uncertainty over who will be the UK’s next prime minister that is harmful.

As the Tory leadership race progresses, it is more likely than not that the pound will face a very bumpy ride, with adverse effects on the British economy. This is because currency movements provide a measure of the vote of confidence of international investors in the strength of an economy.

Movements in the pound

Since the referendum vote, Brexit-related worries have pushed the pound down against the US dollar by around 14%. On a trade-weighted basis – that is against the currencies the UK trades most with – sterling has dropped by around 10.4%.

All this has implications for the British economy. A weaker exchange rate makes Britain’s cost of living higher – imports cost more, causing prices to go up. This makes the Bank of England more likely to consider interest rate hikes.

The fact that the Consumer Price Index (CPI) of inflation is on the rise (from 0.3% just before the referendum vote in May 2016 to 2.1% in April 2019) puts the Bank of England’s policymakers under pressure to hike. They may defer a little longer, however. Research recently published by my colleague Michael Ellington and me shows that combating inflation through interest rate hikes is more effective when inflation is high (around 3% or more). Inflation in the UK remains well below this and so we can expect the Bank of England to keep interest rates as they are for the time being.

This also stops businesses from thinking about investments that would enhance their productivity. No wonder, then, that business investment is currently contracting as UK productivity is hardly growing at all. A leadership contest does little to boost confidence or certainty – especially when it is laden with threats to pull the UK out of the EU without a deal.

In today’s fragile economic environment, Boris Johnson, in particular, has the potential of triggering large movements in the sterling exchange rate. Consider the popularity of Johnson by Google searches alone and how this relates to the ups and downs of the sterling currency.

Recent academic research has shown that Google search activity causes movements in financial assets. For instance, search activity related to Grexit (Greece’s possible from the Euro area in 2012-13) increased the cost of borrowing in the eurozone’s periphery over and above the impact of economic fundamentals and search activity for real estate increased residential real estate prices.

Similarly, Johnson is having an effect on financial markets. He joined the Leave campaign in February 2016 and, as the following graph shows, there is a notable movement of his popularity (measured by the one-year rolling average of Google searches on Boris Johnson) in tandem with sterling’s volatility. 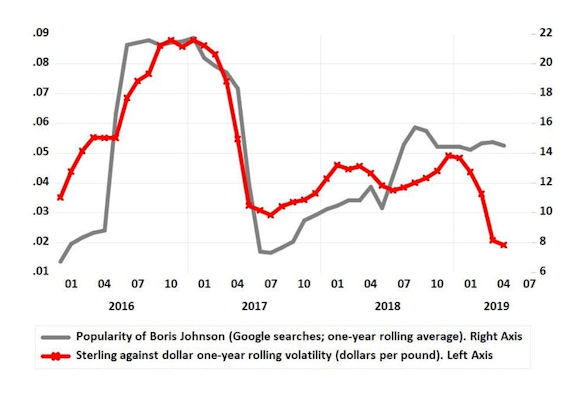 What Johnson says during the Conservative Party leadership race is instantly and extensively discussed on the internet and this has an effect in moving the value of the pound. Boris therefore has a further role to play in the future volatility of the pound – especially since he is the bookies’ favourite to succeed Theresa May as prime minister and, one way or another, push Brexit negotiations over the line.

Given the considerable likelihood of him becoming the next UK prime minister, it would definitely be wise for Boris Johnson to think carefully before making statements that have the potential to move financial assets. The last thing the UK needs is a prime minister who has the potential to trigger considerable instability in its currency and therefore undermine the willingness of international investors to cast a vote of confidence in its already Brexit-battered economy.