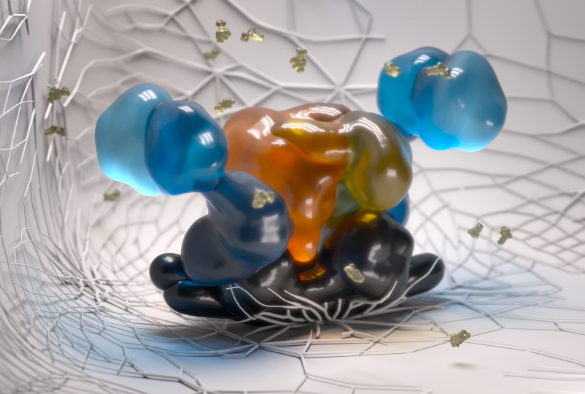 Scientists have identified a new internal regulator that helps control the body’s response to fight infection.

The discovery could be a target for new drugs to tackle autoimmune diseases, such as lupus and scleroderma, where healthy tissues are attacked by the body’s own immune system.

The international collaboration was led by the University of Leeds and University of Pennsylvania and involved researchers from the University of Liverpool’s Institute of Integrative Biology. The team’s findings have been published online today in Nature and will be featured on the front cover of the print edition next month.

The scientists used powerful cryo-electron microscopes to reveal the structure of the regulator, comprised of two proteins in the body called BRISC and SHMT2, to understand for the first time how they work together in a cell.

The scientists also discovered, rather unexpectedly, that the BRISC-SHMT2 protein complex can be regulated by the active form of vitamin B6. Although vitamin B6 was shown to be important in the function of this regulator, the scientists caution that further research is needed to fully understand the role that it plays.

The SHMT2 protein was studied in the laboratory by biochemists at Liverpool. Dr Dominic Byrne measured SHMT2 behaviour using a technique called Differential Scanning Fluorometry (DSF), which monitors protein unfolding at a series of different temperatures. By adding vitamin B6, but not an inactive compound, clear changes in the SHMT2 protein structure were observed.

Professor Patrick Eyers commented: “One of the interesting things about this study is that it links metabolism to inflammatory signalling, an important drug target in patients with an overactive immune response. The simple assay developed in Liverpool will allow us to evaluate whether vitamin B6 drug mimics can also change the SHMT2/BRISC pseudoenzyme structure, and if this is relevant to interfering with a hyperactive inflammatory system seen in patients with lupus.”

Dr Elton Zeqiraj from the University of Leeds said: “We want to put a brake on the body’s own immune system to stop it turning on itself. Our discovery has the potential to help us find a new drug to target this regulator, to suppress the immune system and stop the body destroying its own cells, even when there is no infection present. We’re a long way off being able to find a new effective treatment for autoimmune disease, but we’re excited because this discovery could open the door to a new class of drugs.”

Sumi Subramaniam, Infection and Immunobiology Portfolio Manager at Wellcome, said: “This study uses cutting-edge technology to unravel the fundamental biological function of two proteins and how they interact to control the body’s immune response to an infection. Disrupting these proteins could be an exciting new avenue to explore in tackling autoimmune diseases, where the immune system attacks healthy cells. We have very few effective treatments for autoimmunity, and these findings could help researchers to find new ways to control the immune response.”