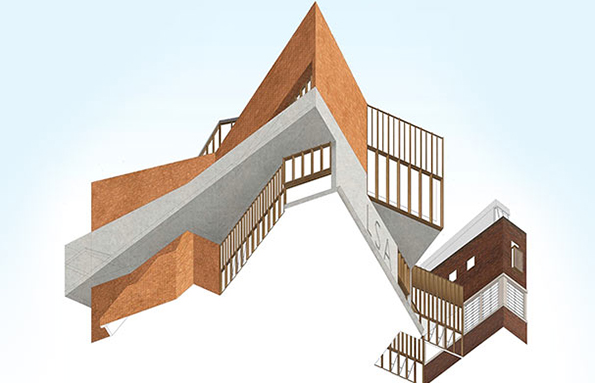 A worm’s eye view of the winning project

O’Donnell + Tuomey has seen off an impressive shortlist, which included RIBA Stirling Prize-winning practice Haworth Tompkins, to win the contest to design a new extension to the University of Liverpool’s School of Architecture.

The Dublin-based firm, which has itself been shorltisted for the RIBA Stirling Prize five times was chosen as the unanimous winner ahead of 6a Architects, Eric Parry Architects, Carmody Groarke and fellow Dubliners Grafton Architects.

The £23 million scheme (construction cost £13.8 million) will sit on a plot of land currently used as a car park between the school’s existing Leverhulme building and Basil Spence’s Chadwick Laboratory physics building.

Marco Iuliano, School of Architecture Associate Professor and competition director, said: “The jurors unanimously voted for the design of O’Donnell + Tuomey for the way in which the proposal reorganised the space in both the Georgian terraces and Leverhulme building, but also established a new building subtly inflected towards the new park and the existing cathedral.

“The jury also awarded two special mentions, namely to 6a architects for the flexible, open organisation of their proposal; and to Haworth Tompkins for the thorough analysis of the entire program.”

The competition sought “to identify the most interesting architects for this particular brief and to highlight the importance of architectural quality”.

The University also said it was “equally interested in the pedagogic potential of the initiative, which can involve and expose our students to all the stages of the process”.

The exact remit and extent of the project brief was left deliberately loose. The winning design comprises a new-build addition of more than 2,000m² as well as a remodelling of the school’s existing accommodation currently housed in a Georgian terrace and the neighbouring Leverhulme building, which was designed by Charles Reilly in the 1930s and revamped in the 1980s by King and McAllister.

All six proposals were presented in a public forum.

A final design will be unveiled in early 2020. Construction of the new building and the reorganisation of the existing premises is expected to be completed by 2023.

This article was originally published in the Architects’ Journal