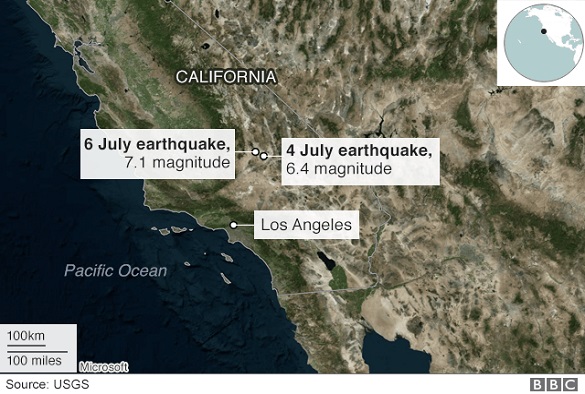 Daniel Faulkner is Professor of Geology and Geophysics and Head of the University’s Department of Earth, Ocean and Ecological Sciences:

Two earthquakes struck southern California on Thursday and Friday last week. The first registered M6.4 and was followed by a much stronger M7.1 earthquake.

Earthquakes of this size cause significant damage to infrastructure and it is testament to regional building codes that no building collapses have been reported, nor any fatalities.

California is an intensely seismically active region, and well known for San Andreas Fault that forms the boundary between the Pacific and North American tectonic plates. However, neither of these earthquakes occurred on the San Andreas Fault. Instead they happened within the so-called East California Shear Zone, around 150km to east.

The M6.4 event was a foreshock to the 8 times as energetic M7.1 earthquake that propagated north-northwest. Not all earthquakes have foreshocks and they cannot be used to predict larger earthquakes. The two earthquakes will be followed by months to years of aftershocks that will slowly reduce in size with time.

The  threat of the`Big One’

Southern California has had fewer large earthquakes over the past 20 years than are expected for this region. The biggest threat is the so-called ‘Big One’, a ~M8 earthquake that will eventually occur on the southern San Andreas Fault.

The last major earthquake on this fault was the 1857 Fort Tejon M7.9 event. It is unlikely that these two significant earthquakes within the East California Shear Zone will have any bearing on when the ‘Big One’ occurs on the San Andreas Fault.

Although we know where significant earthquakes are likely to occur in the future, prediction of earthquakes on shorter timescales of days to weeks relies on a fundamental understanding of earthquakes that we do not yet have.