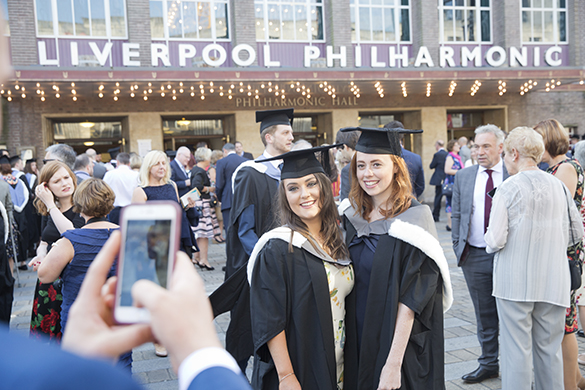 The University is planning to welcome more than 6,000 graduates and their guests to campus for Graduation Week which begins today (Monday, 15 July).

The ceremonies will be taking place between Monday, 15 July and Friday, 19 July in the Philharmonic Hall.

During the week, honorary degrees will also be awarded to nine esteemed individuals from the worlds of art, business, health, law and media.

The Graduation Marquee in Abercromby Square will be open every day from 8.30am to 7pm.  Admission is free and there will be a well-stocked bar and food market area, with delicious offerings from a variety of independent, local food traders.

Graduates will join the global family of more than 228,000 University of Liverpool alumni. The  Alumni team will be on hand in the Sports Centre for graduates to claim a free alumni pin badge. Further details about the benefits of being an alumni are on the Class of 2019 website.

All of the graduation ceremonies will be broadcast live on our website.

To join the conversation on social media, use the hashtags #LivUniGrad #Classof2019