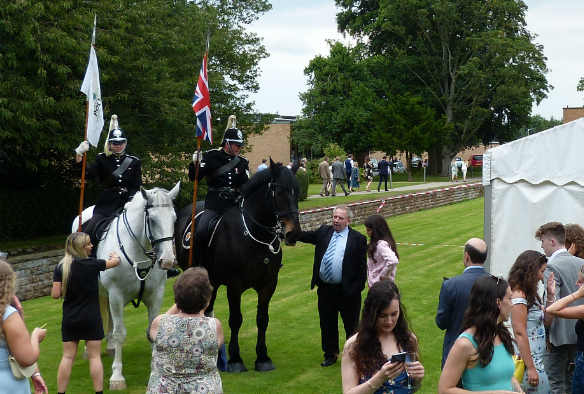 Students, parents and staff were delighted to have two horses from the Merseyside Mounted Police Section stand guard at their graduations this week.

Professor Cathy McGowan, Head of Department of Equine Clinical Science, said: “Staff at from our Equine Practice and their final year student groups at Leahurst have been working with these beautiful horses every week for the past year and were delighted that the horses could come to their special day.”

The University of Liverpool provides in-kind veterinary care and support to the Merseyside Mounted Police Section, as part of their ‘Stand Tall’ campaign.

Some of this work will feature on the new series of Cop Cars, which airs on UKTV’s Dave Channel from 29 July. Staff and students were filmed as part of an episode focused on the mounted section, which will air later this summer (date TBC).

To join the graduation conversation on social media, use the hashtags #LivUniGrad #Classof2019