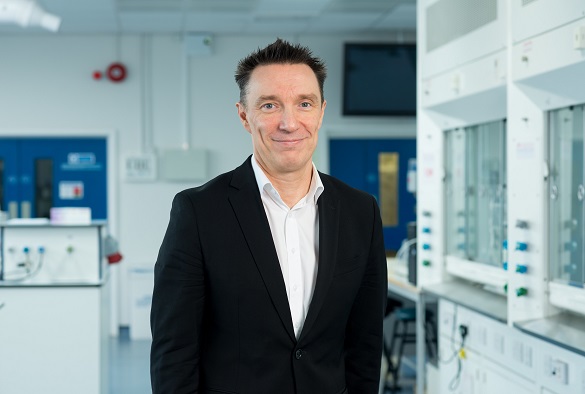 Professor Andy Cooper FRS, from the University’s Department of Chemistry, has been awarded the prestigious Hughes Medal by the Royal Society “for the design and synthesis of new classes of organic materials with applications in energy storage, energy production and energy-efficient separations.”

The Hughes Medal is awarded by the Royal Society to an outstanding researcher in the field of energy. Named after the scientist David E Hughes FRS, it was first awarded in 1902 and previous recipients include Alexander Graham Bell and Nobel Laureates such as William Lawrence Bragg, Max Born, Enrico Fermi, and Stephen Hawking.

Professor Cooper’s research interests include organic materials, supramolecular chemistry, energy materials, and high-throughput methods. His research seeks to address the challenge of clean energy provision by developing new materials to harness energy from sunlight, and building methods to find such materials on a faster timescale.

His current focus is developing autonomous robotics to significantly accelerate the discovery of new materials and his team have developed a mobile robotic chemist that can work unassisted in the laboratory.

Professor Andy Cooper said:
“It is a terrific honour to receive this prize, which was first awarded 117 years ago. It reflects the work of a team of exceptionally talented researchers, both in my group in Liverpool and in the groups that we collaborate with elsewhere.”

Sir Venki Ramakrishnan, President of the Royal Society, said:
“The Royal Society gives an array of medals and awards to scientists who have done exceptional, ground-breaking work. This year, it is again a pleasure to see these awards bestowed on scientists who have made such distinguished and far-reaching contributions in their fields. I congratulate and thank them for their efforts.”

Professor Cooper is the Academic Director of the Materials Innovation Factory, an £81 million facility at the forefront of advanced materials research, design and development.

He is also Director of the Leverhulme Centre for Functional Materials Design, an interdisciplinary research centre which brings together chemical knowledge with state-of-the-art computer science to develop a new approach to the design of functional materials at the atomic scale.