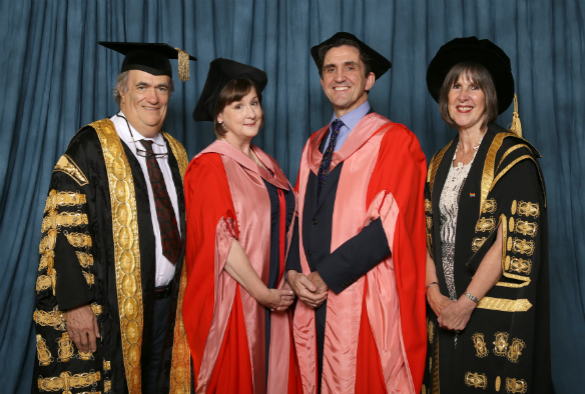 Call the Midwife creator Heidi Thomas and actor Stephen McGann returned to their home city yesterday to collect honorary degrees from the University of Liverpool.

The couple, who have been married for almost 30 years and work together on the hit BBC show, received their honorary doctorates from Chancellor Colm Tóibín at Liverpool Philharmonic Hall.

Garston-born Heidi is an alumna of the University and has delighted audiences with her exceptional work as a writer and producer for more than 30 years. Her award-winning creations, which include the 2007 Liverpool-set drama series Lilies, Cranford and Call the Midwife, have helped bring important issues such as illegal abortion, gender and sexuality, immigration and racism to a mainstream audience.

Speaking at the ceremony Heidi said: “Like all the truly special things in life, this is a privilege that was completely unforeseen. When I graduated from this university in 1983 I had no notion that one day I would be coming back here to receive an honorary doctorate and I had no idea that my husband of 29 years would be sitting next to me receiving an honour of his own.”

Reflecting on her own graduation memories, Heidi told the Class of 2019: “Today is a still point in your achievements. Savour what you’ve achieved, for the best is yet to come.”

Actor and science communicator Stephen was born in Kensington, only a short distance from the University. His critically acclaimed 2017 memoir Flesh and blood: a history of my family in seven sicknesses, traces the relationship between social history, public health and the physical health of his ancestors over the past 150 years.

Speaking passionately about the power of education and recalling how Liverpool’s “redbrick cathedral” had inspired his whole family, he said: “What began as a redbricked inspiration in the eyes of a working class family living in the shadow of this university has led full circle to this ceremony today.

“I am deeply proud to accept this honour on behalf of all those people in my family who came before me, who dreamt of a better world that education could bring.”

WATCH: Heidi and Stephen’s advice to the Class of 2019