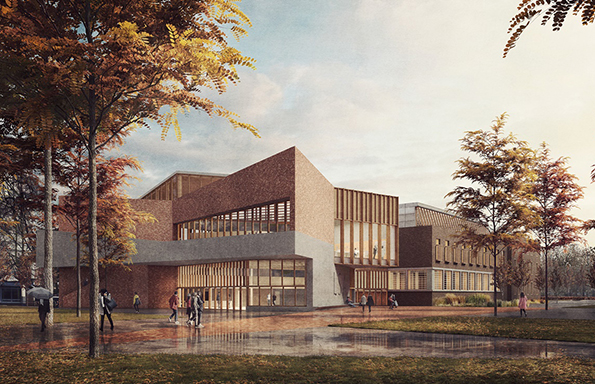 Dublin-based architects, O’Donnell + Tuomey were chosen unanimously as the winner for the £23m scheme to extend University of Liverpool School of Architecture (LSA), and today we can reveal the winning design.

Undergraduates, postgraduates, staff from the school and the estates department took part in a two-stage selection process, which started by narrowing down an invited longlist of 18 practices to nine, before a further trim to six finalists – 6a Architects, Eric Parry Architects, Carmody Groarke, Haworth Tompkins, Grafton Architects and winners, O’Donnell + Tuomey.

On the final judging day, students, along with the competition committee and university estates’ representatives, remained in dialogue with the jury.

Dr Marco Iuliano, LSA Associate Professor and competition director, said it had been important to engage the student body throughout the contest as the school sought to create a “flagship project … in a post-iconic, very uncertain time for architecture”.

He added: “We capitalised on the opportunity to build a democratic competition process, using the power of architecture not only to materialise beauty, but as an influential agent to initiate a dialogue among the different actors involved in it: students, staff, professionals, jurors and the estates department. 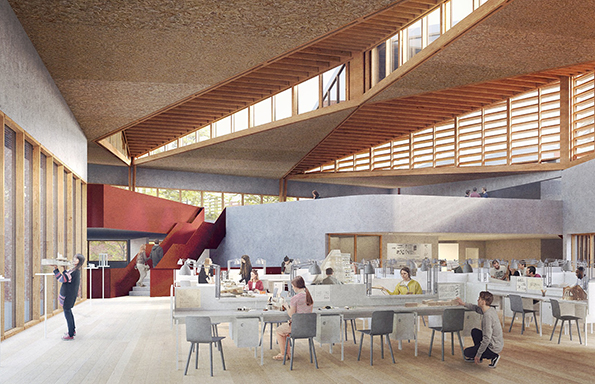 “O’Donnell + Tuomey’s appointment is only as a starting point. Indeed, our journey now continues, working with the university and the appointed architects to shape the building and the architectural education of the future.

“We envision a school where we will continue to see students not as clients nor customers but as peers, as the fundamental component to imagine beautiful ideas and beautiful buildings for the society to come.”

The proposed building will sit adjacent to the current School. The winning design comprises a new-build addition of more than 2,000m², as well as a remodelling of the existing accommodation, facing Abercromby Square, and the neighbouring Leverhulme building, which was designed by Charles Reilly in the 1930s and revamped in the 1980s by King and McAllister.

The students felt O’Donnell + Tuomey’s vision had best “captured the evolution of the architecture school”. The design was also praised for its “balance between free and enclosed space, contextual sensitivity and original style”.

The Irish practice’s proposal was the judges’ undisputed winner too – although there were commendations for the “flexible, open organisation” of 6a’s proposal and for the “thorough analysis of the entire program” by Haworth Tompkins.

According to architect Alan Berman, now of Studio Berman, who observed the competition process and later interviewed the jury, Chair Frampton was wowed by the “lucid rationality” of O’Donnell + Tuomey’s proposed restructuring of the existing spaces and the way the scheme faced the new park.

Kenneth Frampton said: “What capped their entry was their new, dynamic ‘head’ building for the School of Architecture.” 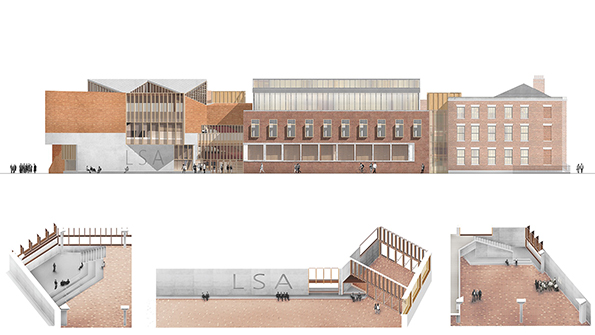 Maria Balshaw described the winning design as having the potential “to become the best architectural contribution to the University of Liverpool campus”, while the practice’s multi-layered response to the site impressed Michael Wilford.

Michael Wilford, who worked with the best-known LSA graduate, James Stirling, said: “At first glance, the geometry of O’Donnell + Tuomey’s proposal seemed gratuitous but, on examination, it clearly derived from the context and masterplan.

“As well as ensuring views towards the cathedral, the building opens out to the park, responding to, and making a presence on, adjacent pedestrian routes.

“This in turn gives to each of the studios different qualities. It was noticeable that some of the entries seemed to take little note of the nearby cathedral.”

The longstanding link between Liverpool and Ireland was also noted, with Iuliano stating that O’Donnell + Tuomey’s selection would “continue the tradition of the Irish presence in the city”.

Judging Chair, Kenneth Frampton concluded: “This has been an important and significant competition, which suggests the possibility of a renaissance in British architecture, in part because of the power of Irish architectural culture, which has the capacity of raising the stakes for architecture in this part of the world.”

Construction of the new building and refurbishment of the existing premises is expected to be completed by 2023, as part of the wider University campus masterplan.