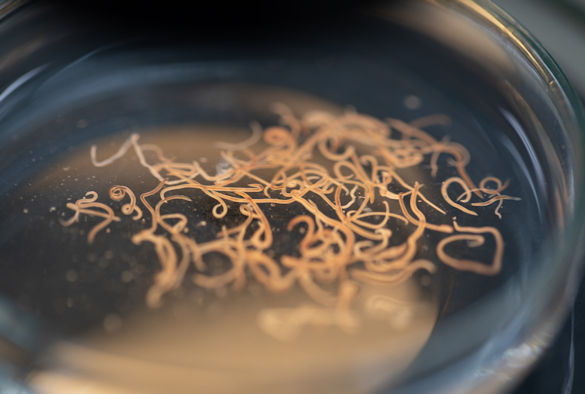 The results of the latest review of deworming programmes, published in the Cochrane Database of Systematic Reviews, reaffirms the findings of earlier reviews concerning soil-transmitted intestinal worms conducted by researchers from the University of Liverpool and the Liverpool School of Tropical Medicine (LSTM).

About a quarter of the world’s population could have worms living in their guts. For many years experts have recommended treating large groups, particularly children, at risk of infection. Parasites, such as roundworm, hookworm and whipworm could be living inside more than 1.5 billion people according to the World Health Organization (WHO).

Children are usually infected through contaminated food but hookworm larvae can also burrow into feet, get into blood vessels and make their way to the heart and lungs. From there they can climb up to the oesophagus and be swallowed, ending up in the gut where they grow.

The “worm wars” debate has been raging for over 10 years. On one side, there are established global advocacy organizations continuing to raise funds to implement these programmes, distributing free deworming medicines to whole continents in pursuit of this goal, with development economists and parasitologists underpinning the argument. On the other, some academics have raised questions about the evidence base for these policies, originating from Cochrane and the first edition of a review in 2000. Cochrane reviews are independent rigorous summaries and appraisals of all the relevant research evidence around a topic.

What is in this new edition?

The authors of the latest review have consolidated the results, performing analyses that the critics have said hides true effects; they have added six new trials and responded to a 50-page published criticism of the review.

The substantive findings are little changed from 2015. With now a total of over 50 trials including 84,336 participants, plus the additional trial of one million children: the team found no benefit for haemoglobin, cognition, school performance, and mortality. While weight studies carried out over 20 years ago showed large effects on weight, this has not been seen in the more recent, much larger studies.

Professor David Taylor-Robinson, University of Liverpool’s Department of Public Health and Policy, who is an author on the review, said: “People developing global guidelines should be clear on what basis deworming programmes are being promoted. Current evidence does not support large public health programmes of deworming in low- and middle-income settings, particularly in terms of wider, societal and educational benefit. Policymakers should consider the findings of our review and make their own minds up.”

LSTM’s Professor Paul Garner, who is an author on the review, said: “All the new trials are well conducted, and show little or no effect; studies conducted in isolated populations over 20 years ago should not be selected out to support current policies. Treat worms through health services – yes, but these data suggest donors and countries should re-assess policies for mass treatment”.

This Cochrane Review was co-ordinated by the Cochrane Infectious Disease Group (CIDG), which has its editorial base at LSTM. The CIDG has been in operation since 1994 and consists of over 600 authors from 52 countries and is supported by UK aid from the UK Government for the benefit of low- and middle-income countries.