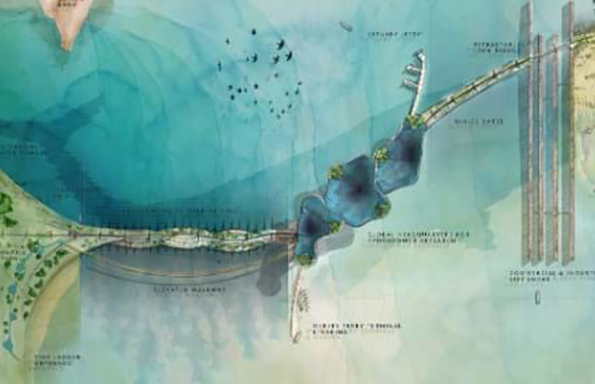 An ambitious new Mersey barrage concept shows how tidal energy projects can offer many benefits to society in addition to clean renewable energy.

The academics have proposed an ambitious new design for a mooted tidal energy barrage on the Mersey Estuary, which has one of the largest tidal ranges in the UK. Their concept, which is based on the shape of a whale and includes buildings and platforms for recreation in the centre of the river, illustrates the additional benefits tidal schemes can bring.

This model, which was developed by academics at Lancaster University’s Engineering Department, includes a range of factors that should be considered for tidal scheme designs, including: energy generation; land use; habitat; flood risk; transport; fisheries; cultural heritage; water supply; tourism and job creation.

George Aggidis, Professor of Energy Engineering at Lancaster University, lead researcher on the paper and creator of the North West Hydro Resource Model, said: “We need to view tidal energy projects holistically and recognise that they provide opportunities beyond energy generation, including environmental, societal and economic opportunities.

“The UK is uniquely positioned to benefit from tidal power, but so far no schemes have managed to get off the drawing board. By considering the needs of people, and the need to create compensatory habitats for wildlife, organic architectural designs like ours show how developers can enhance, rather than detract, from estuaries like the Mersey.

“Tidal barrages and lagoons can offer significant advantages over other sources of renewable power – we need to keep these additional opportunities in mind when comparing the costs and benefits of different forms of energy generation,” added Professor Aggidis.

The researchers say that with the right design a Mersey barrage has the potential to become a globally identifiable piece of architectural infrastructure – a ‘hydropower landmark’ boosting tourism to the region.

Their vision includes new transport and leisure links from Port Sunlight on the Wirral to the Festival Gardens on the Liverpool side of the estuary with new recreational walking and cycle paths and a monorail for commuters.

The concept includes a world-leading centre for hydropower research, which they argue would further enhance the region’s excellence in science and innovation and support education into the technology.

However, one of the main obstacles to tidal projects, in addition to relatively high initial capital costs, is the perceived impact on the habitat of existing wildlife within estuaries.

The researchers believe any Mersey tidal project would need to offer alternative habitat to compensate for losses to existing mud flats – which are a major feeding ground for migratory birds.

However, they argue that concerns about impact to existing wildlife needs to be balanced against future environmental challenges.

Professor Aggidis said: “As with hydropower dams, tidal barrages could have a major impact on local environments, with concerns over biodiversity. Steps would need to be taken to balance the negative environmental impact against the potential to protect against flooding from future sea-level rises caused by global warming.

“We recognise that the total area of intertidal mud-flats that would be lost cannot be replaced. To compensate for the negative ecological effects of the barrage, wildlife will be integrated into the core of the design, which provide habitats to encourage increases in the variety of biodiversity on the Mersey estuary.”

The researchers have outlined their WHALE design in the paper ‘Opportunities for tidal range projects beyond energy generation: using Mersey barrage as a case study’, which has been published in the journal Frontiers of Architectural Research.