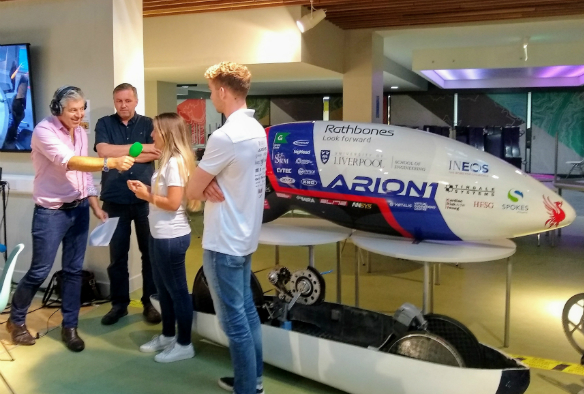 Presenter Justin Webb and guest university panellists discussed a range of topics in front of a live audience at the Liverpool Guild of Students, with co-presenter Mishal Husain presenting from London.

Vice-Chancellor Professor Dame Janet Beer discussed the university’s important work and ongoing commitment to widening access in the Liverpool City Region, including the opening of the new University of Liverpool Maths School in 2020.

Asked for her views on Labour’s proposed 7% cap on private school students at universities, Dame Janet admitted that while it probably wouldn’t affect Liverpool’s own student ratio, it could prove to be a “very difficult one” for particular disciplines such as Classics, which most state schools don’t offer the required A-levels for.

Engineering students Casey Spencer and Chris Owen from the University’s Velocipede Team were interviewed alongside lecturer Steve Bode about their ARION5 bike, which broke the women’s multitrack human-powered land speed record last month. Casey put their success down to “a lot of hard work, a lot of time and lot of dedication,” and spoke passionately about how the experience has helped set her up for a future career in engineering.

Students Anna Scott, Lily Blakeney-Edwards and Maddie Walker also shared their views on how universities can support students facing sexual harassment or violence and highlighted Liverpool’s ‘Call it Out’ campaign as an example of positive initiatives being taken to tackle the issue on university campuses.

The Liverpool-themed ‘Puzzle for Today’ was set by University of Liverpool Maths School headteacher Damian Haigh. The puzzle question is below and the answer (if needed!) will be revealed on the BBC Radio 4 website tomorrow.

The Queen Elizabeth Ocean Liner sets sail from New York to Liverpool and travels the 3300 miles directly at a constant speed of 20 miles per hour. At the same time, one of the Liver birds sets out from Liverpool to meet it, travelling directly at the phenomenal speed of 100 miles per hour. When it gets to the ship it immediately turns round and returns to Liverpool. On returning to Liverpool it sets out once again to meet the ship. This to-and-fro continues until the ship reaches Liverpool 165 hours after it left New York. How far does the Liver bird travel in total?

Listen to the show via BBC Sounds: https://www.bbc.co.uk/sounds/play/m0008wkh