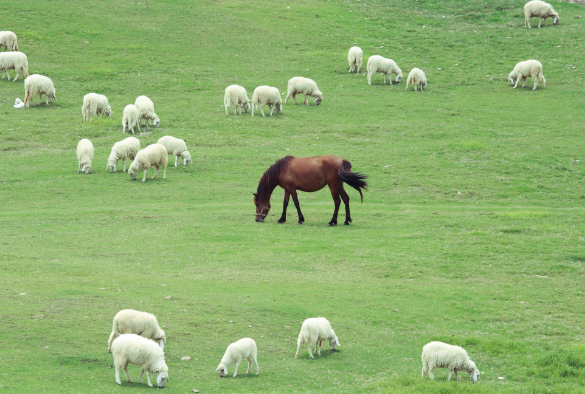 A harmful parasite that costs the UK cattle and sheep industry an estimated £300 million per year may also be an under‐recognised cause of liver disease in horses, a study by the University of Liverpool has found.

The study was funded by the Animal Welfare Foundation (AWF) and is published in the Equine Veterinary Journal.

Liver fluke is a common cause of disease in cattle and sheep but can also infect other grazing animals, including horses, donkeys, deer and rabbits.

Horses frequently graze the same pastures as sheep and cattle but are thought to be relatively resistant to liver fluke infection. However, there is evidence that horses can be adversely affected by liver fluke, with clinical signs including poor performance, fatigue, diarrhoea, poor appetite and jaundice.

At the same time, liver disease is common in horses and the cause can often be difficult to find. These factors together led to a concern that liver fluke in horses may be responsible for some cases of undiagnosed equine liver disease.

In the first study of its kind, a research team led by veterinary parasitologist Professor Diana Williams at the Institute of Infection and Global Health set out to determine the prevalence of liver fluke infection in the general horse population; compare the genotypes of flukes isolated from horses with those found in British sheep and cattle; and, using a case-control study, investigate whether liver fluke could be a cause of equine liver disease.

A total of 224 UK horses were examined for fluke as part of the prevalence study, of which 9.8% (22) returned a positive ELISA antibody test for liver fluke infection.

109 cases, submitted from 49 vet practices, were considered suitable to use in the case-control study. Seventeen horses tested positive for liver fluke, representing 11% of the horses with liver disease. A total of 180 control samples were tested, of which just 2.5% returned positive results to the antibody test, indicating that horses with liver disease had significantly higher odds of being positive for liver fluke.

They also showed that the flukes isolated from horses are from the same population as those found in sheep and cattle.

Professor Williams said: “This work demonstrates that exposure to liver fluke can occur commonly in horses and that it may be an under‐recognised cause of liver disease.

“We normally recommend that fields where horses graze are co-grazed by sheep or cattle as this is a very effective way to control gut worms, but our research shows that sheep can be a source of liver fluke infection for horses, so routine testing of horses that have grazed on pasture used for sheep is good practice, especially in areas of high fluke risk.”

Chris Laurence, AWF Chair of Trustees, added: “The Animal Welfare Foundation is delighted that the test which is the result of this study will enable vets in practice to easily diagnose liver fluke in their patients.  Liver disease is relatively common and causes significant morbidity that inevitably affects the welfare of the affected horses.  Easy diagnosis can lead to prompt and effective treatment.  This is exactly what the AWF aims to achieve from the research we fund.”

The diagnostic ELISA test developed through this work is the only one of its kind available in the UK and is exclusively offered by Liverpool Veterinary Parasitology Diagnostics.