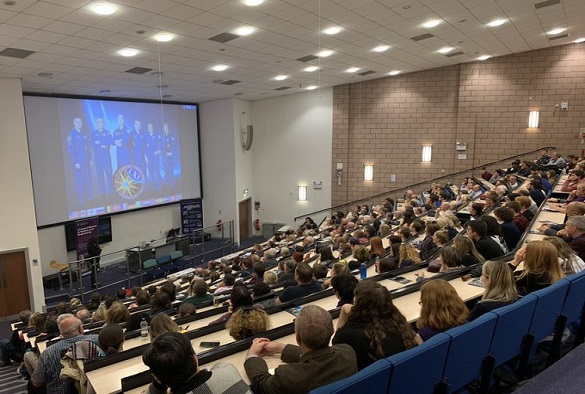 Holly Ridings, NASA’s first female Chief Flight Director, spoke about the future of human space flight as part of the University’s activities to mark the 50th anniversary of the moon landing

Holly, who works at Mission Control in Houston, is responsible for all NASA Human Space Flight missions including the International Space Station, the Orion Programme, NASA’s return to the Moon, and future manned missions to Mars.

Organised by the University’s Liverpool Women in Science & Engineering Society (LivWiSE) with the support of colleagues across the University, Holly’s visit to Liverpool included a Q&A session with local schools, a public lecture and recording a podcast.

Holly gave an inspirational talk to more than 200 school children from 14 local schools. She spoke about what inspired her to work for NASA, what her role involves and the current and future of human space flight missions. Dr Jackie Bell, a Liverpool graduate and participant on the BBC’s ‘Astronauts: Do You Have What it Takes?’ facilitated a lively Q&A session with the audience.

Holly also delivered a public lecture about the future of human space flight to a packed out audience in the Sherrington Building.

You can watch the lecture >>>

Earlier in the day Holly was interviewed by Dr Kate Black, from the School of Engineering about leadership for a podcast for the Academy. The podcast will be available to listen to in the new year.

Commenting on her visit to Liverpool, Holly said: “It was a pleasure to visit the University of Liverpool. This is my first time to Liverpool and I am really impressed by the work LivWiSE is doing to encourage and celebrate women in space, science and technology which will benefit not just the university and the local community but also the rest of the world.”

Darren Mooney, Diversity & Equality Officer in Human Resources who organised Holly’s visit, said:  “It has been a real pleasure to welcome Holly to the University as part of our activities to mark the anniversary of Apollo 11. I think I speak for everyone who attended when saying that Holly was gracious, inspiring, knowledgable and entertaining all at the same time. This event wouldn’t have been possible without the support of colleagues from Widening Participation, all the Schools in the Faculty of Science and Engineering and my team in HR.” 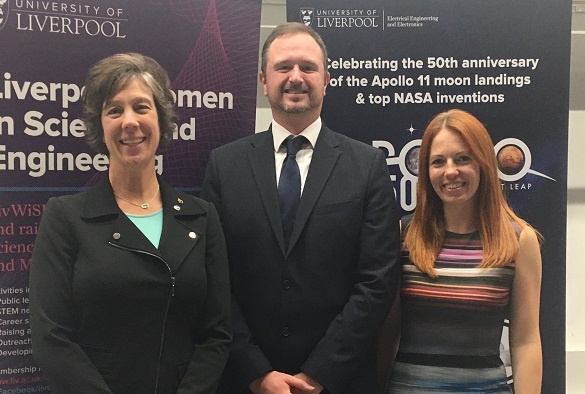 Film screenings
The week of events will end with two film screenings, the first of the film Hidden Figures will be held in Sherrington Building, Lecture Theatre 1 on Thursday 10 October at 5.30pm. Nominated for three Oscars, Hidden Figures tells the story of three black female mathematicians who worked at the NASA during the Space Race. Find out more here >>>>

A screening of the film Mercury 13 will also be shown on Friday, 11 October at 5.30pm documenting the pioneering women who privately trained to be astronauts in the early 1960’s. For further details and book a place click here >>>

Ada Lovelace Day
In addition to Holly’s visit, the Department of Mathematical Sciences organised an event to celebrate Ada Lovelace Day. The event included a coding event, a musical performance of composer Emily Howard’s ‘Ada Sketches’, an accompanying interview with Emily herself, and a panel discussion centred around collaboration in research in the sciences and arts.