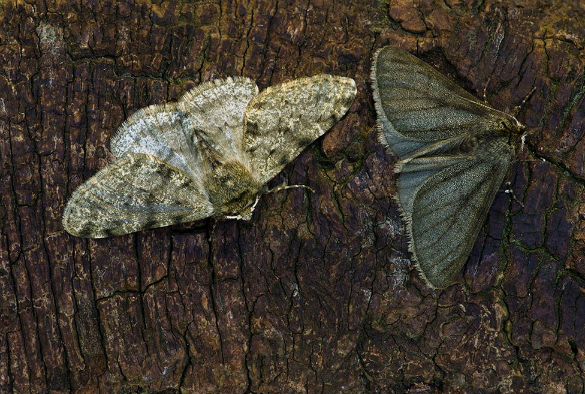 The rise of dark forms of many species of moth in heavily polluted areas of 19th and 20th century Britain, known as industrial melanism, was a highly visible response to environmental change. But did the different species rely on the same gene to adapt?

New research by the University of Liverpool reveals that three species of moth, including the famous peppered moth, indeed did. Interestingly, however, the mutations that gave rise to dark forms of the ‘pale brindled beauty’ and ‘scalloped hazel’ moths likely occurred much earlier than that of the ‘peppered moth’ in the early 1800s – and may predate the industrial revolution by hundreds of years.

Principal Investigator Professor Ilik Saccheri explains: “Although many people have heard about industrial melanism in the British peppered moth, it is not widely appreciated that dark forms increased in over 100 other species of moths during the period of industrial pollution. This raises the question of whether they relied on the same or similar genetic mechanism to achieve this colour change. This was not a foregone conclusion because melanism in insects may be influenced by many different genes.”

In a study published in Biology Letters, researchers from the University of Liverpool, Liverpool School of Tropical Medicine and Manchester Museum produced low coverage whole genome sequences for the pale brindled beauty and scalloped hazel species to compare with existing information about the genetics of industrial melanism in the peppered moth.

Genetic linkage mapping using parent-offspring families shows that the mutation for melanism occurs in the same genetic region (containing the cortex gene) in all three species. Further analysis of wild samples, however, suggests that the genetic origins of melanism in the pale brindled beauty and scalloped hazel are much older than that in the British peppered moth.

Professor Saccheri said: “Our findings imply that these dark forms can persist at low frequencies in non-polluted environments and lend further support to the idea that adaptive evolution makes repeated use of the same genetic and developmental machinery across deep evolutionary time.”

The researchers chose to focus on these three species because they were studied by University of Liverpool and Manchester scientists in the 1970s, in the days before this type of molecular genetic analysis was possible.

Professor Saccheri adds: “Back then, the researchers appreciated that they were dealing with similar phenotypes and selection pressures but wouldn’t have considered that they might have been studying the same gene in the different species. I feel gratified that we have been able to collaborate through time with researchers working on these topics over 40 years ago.”