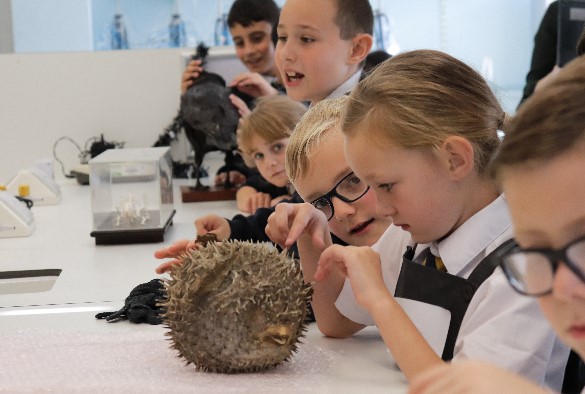 Organised by the Institute of Integrative Biology and School of Life Sciences in collaboration with World Museum Liverpool, the event used the Halloween theme to capture the imagination of the pupils and introduce them to some different areas of life sciences research.

During the workshops, pupils learnt about how animals adapt to their environment, communicate with each other and protect themselves from prey. Activities included exploring the anatomy of creepy-crawlies under microscopes, examining animal skulls from different species, discovering how bats see in the dark and understanding how the human body reacts to fear.

Zoology staff from the World Museum also brought along some taxidermy specimens, including a raven, for the pupils to interact with.

Dr Jill Madine, Public Engagement lead for the Institute of Integrative Biology, said: “It was amazing to hear the enthusiasm from the pupils from the minute they entered the lab exclaiming wow this is what a real science lab is like! Followed by comments like science is great, I now want to be a scientist when I grow up.”