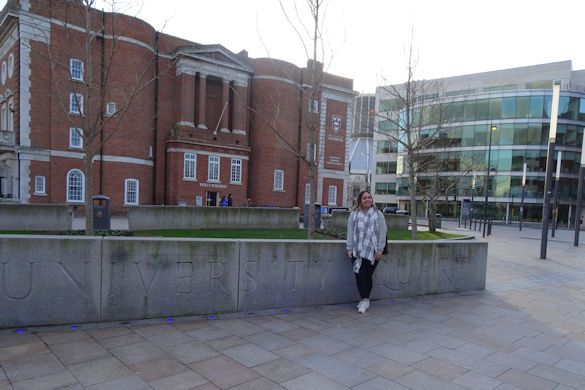 Nikita is a Politics and Law undergraduate at the University. Here she discusses her experience of trying out the NHS Five Steps to Mental Wellbeing.

“As a social media ambassador for the University, I was asked to take part in a new mental wellbeing campaign to support students.

The brief was to think about some creative ways to try out the NHS advised ‘Five Steps to Mental Wellbeing’ and vlog my efforts. As someone who suffers from mental illness, I was completely up for being part of it and trying to help others as much as I can, as well as to see if the steps worked for me too.

When I first looked at the advised steps, I thought they were a bit generic and definitely easier said than done! On first look they don’t leave you feeling particularly inspired – It was tricky to see how it could help anyone with their mental wellbeing.

But then I started to delve deeper into what each step really consisted off and the creative juices started flowing. The more I thought about it, the more ideas were coming to mind. It takes a bit of time and effort but when you really think about it, there is a lot you can do to try to improve your mental wellbeing.

The step to ‘connect’ made me think about what I could do to show my friends and family that I am grateful for them being in my life. I decided to team up with my mum and make a chicken curry for my housemates and friends.

When I was younger, my mum and I used to love cooking together; and as the academic year was coming to an end, the fridge and cupboards were looking pretty bare so I thought making a meal for my housemates would be appreciated!

Cooking with my mum was so much fun. It was non-stop laughter, mainly due to my lack of cooking skills! Seeing my housemates’ faces light up when they saw a lovely hot meal after so many pot noodles and toast was priceless! We had a lovely evening together eating and reminiscing about the good times we have shared.

I felt content and happy that I could give something so special back to my friends who have been there for me through some tough times. It was also amazing to spend some quality time with my mum after being away from her for a few months whilst at uni. The whole evening reminded me that I am surrounded by people that I love very much, and that whenever times are getting hard and your mind is in a dark place, there are friends and family right there to help.

VERDICT: For me, this step was very helpful. I would give it a solid 9/10 (just because I’m vegetarian so I couldn’t eat my own hard work).

This step was really daunting for me. Being active has not really been my thing…I used to do a lot of sports when I was younger but now, not so much!

I wanted to think of something outside the box to represent this step because anyone can suggest going to the gym or going for a jog, but not everyone likes the gym or feels comfortable jogging in the streets.

I came up with the idea of gardening because I thought it would tire me out, get me outdoors and would be pretty satisfying! Cutting the grass and taking out the weeds was extremely therapeutic.

One thing I learned was how much persistence is necessary for gardening. The garden only ever looks amazing when it is completely done, so you have to keep going until it’s finished, no matter how tired you get. The result at the end though is incredible and you get the greatest sense of achievement and pride.

VERDICT: I was dreading this step the most and it turned out to be one of the most helpful. Thumbs up from me.

There are so many things I’ve wanted to learn how to do: Bake a cheesecake, learn to swim underwater instead of on top of it, learn to drive (which I’ve now done…yay) and how to sew, which is what I decided to do for this step.

I’ve always worried about how I would fix my clothes if my mum wasn’t here to do it for me and this step gave me the reason I needed to sit down and get my mum to teach me.

Firstly, it was a lot harder than I thought! Very tedious and any little mistake means big consequences (in sewing terms…). It also required a lot of patience, but I got there in the end.

There was a lot of trial and error and I didn’t think it was going to take as long as it did. I felt a bit overwhelmed at times because it was more complicated than I had anticipated but actually it ended up being fun to do and fulfilling to complete.

VERDICT: Sewing is now something that I can say I know how to do. It is an achievement that I’m proud of, and that boosted my self-esteem. Definitely worth a go!

This step is easy really in lots of ways – the littlest things could amount to giving and helping others, but I gave it a lot of thought and decided there were a couple of things I’d like to try.

My mum is someone that means an awful lot to me. She was the first person to pop into my head when thinking about what I could do for this step, not just because she is always willing to help everyone else, but because I wanted to use the opportunity to give something back to her.

Her friends also mean a lot to her so I thought helping out one of her friends to sell some records would help her to get some extra money and also make my mum happy too.

The other thing I decided to do was clean. Cleaning is something my mum has always been on top of and to see the house unusually mucky made me feel upset, because she wouldn’t normally let it get that way, but also determined to help.

I live in a shared house at uni, so we have a cleaning rota to make sure it stays nice. We all do different parts of the house each week so I had some experience in the best ways to clean different areas of the house.

Brilliant in theory, but it was a lot harder at my mum’s house because it has been a while since it had last been cleaned thoroughly so it was quite a big job. As I made a start, it opened my eyes to how hard my mum had to work when I was a child. She had a full-time job as well as looking after me, keeping the house clean and everything else she had to do. I had a very weak immune system as a child, and was often ill which must have added an extra onus to keep things hygienic and clean. It was a big eye-opener which left me feeling particularly grateful for all the behind-the-scenes things she has always done for me.

VERDICT: Even though it was difficult, I tried my best to get it as clean as possible and the reaction on my mum’s face was priceless. I was gutted I didn’t get to record it to put in my video as her face lit up and it was beautiful. It was completely worth the effort.

This step was one I had to really think about as being mindful is incredibly broad.

I decided to use it as an opportunity to reflect on the things I had to be grateful for in my life.

Obviously, it was easy at first, but as I got further down the list it started to get really hard to think of things, which forced me to really think outside the box. I considered really simple things which you don’t tend to give much thought to day to day: Having a roof over my head, having enough money to buy myself food and clothes. It was a really useful exercise.

VERDICT: I was having a hard time when I was doing this step. I felt like nothing was going my way and bad things were happening one after the next. It had become difficult to stay positive but after doing this activity, I definitely felt better. It reminded me that I have so many things to be grateful for that others don’t, and to try to stop focusing on the negatives. It gave me a more positive mindset towards things, so much so that I’ve decided to do this activity once-a-week.

These steps have really opened my eyes to a much happier place. I didn’t really know about the NHS ‘Five Steps to Wellbeing’ before I started this project, but I’ve loved taking part and trying them out. It has made having a positive mind set so much easier.

Taking care of your mental wellbeing is so important. To be honest, I didn’t really realise how important it was until I tried the different tasks for the different steps. I truly believe they work and definitely feel it is something worth trying.”

If at any time during your studies you feel you might benefit from some extra support, we are here to help
We offer a wellbeing drop-in between 11am-3pm every weekday in the Alsop Building for practical and pastoral support in a confidential space. You don’t need to book – simply come along to the Student Welfare Advice and Guidance Information Point on the ground floor of the Alsop Building (on University Square).